Sometime yesterday, while running a slow temperature ramp up in profile mode a number of things happened:

Concurrently the profile, as displayed in the lower window of the interface, continued to move along as programmed. As a result temperatures (over 12 hrs) got up to 110F inside the chamber and 95F beer temp all the while the display showed only the last known beer temp/ fridge temp and set points for both.

Unfortunately I didn’t notice this divergence until this morning. After a reboot, the actual temperatures began registering again but as you can see from the attached screen shot, it looks like there is no data between the short and the reboot as the graph shows just a solid line connecting the two points in time for beer temp/set point, fridge temp/set point, etc. 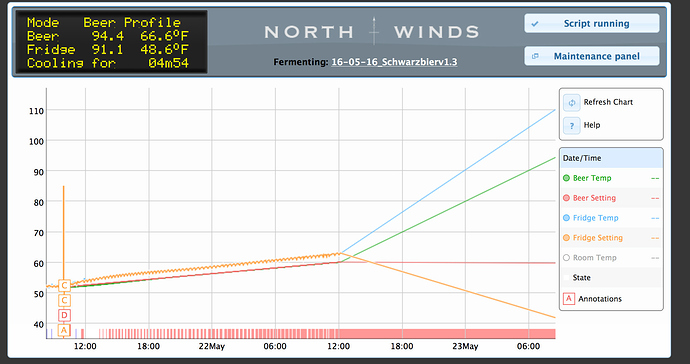 Anyone have an similar issue or any idea on what may have been the issue here? It seems now after rebooting that everything is working as it should.

This type of issue though makes me wonder if there is a way to create a stop order if certain conditions are not met, which might be an indicator that the script has stopped behaving as normal (like the logging of data, or the displayed set temp not matching the set temp on the profile)?

Definitely puzzled by this!

Can you share a zip file of your data? (/var/www/data/ and stderr.txt).
Do you have your heater connected directly or via a OneWire board?

Here is the zip of the data, but where can I find this stderr.txt file?

You can find it in /home/brewpi/logs

Elco, That file is about 30MB, so I cut out the data from this particular brew, pasted in a new doc:

Also, my heater’s SSR is wired directly to the brewpi board.