I just thought I would throw this out there to see what others are interested in.

I use BeerSmith and I find about 70% of most other homebrewers who take their brewing seriously do too.

There seems to be quite a bit of flexibility as to how recipe data (which includes mash and fermentation schedules) is exported. I have laid out and made my own reports/recipe sheets using the variables listed on their forum.

Is there any interest in this? It would seem to be a real shame if we get this new version of BrewPi which cannot receive recipe parameters and fermentation profiles electronically.

At the end of the day they are only really temperature and time values. Volumes etc being of secondary importance.

I agree being able to import the recipe parameters directly into BrewPi would be really useful.

Not sure if this is planned but I also thought it would be great to be able to set up a recipe/schedule for BrewPi and then have it give a reminder on the buzzer for things that require manual input (i.e. hop additions).

Personally I can’t help feel that automated brewing is somewhat pointless without good authoring software. It takes so much of the automation away!

I do think the BeerSmith cloud is pretty useless apart from being a handy way of storing recipes.

Just imagine. Create recipe, click export. Load it into BrewPi and off you go!

PS - Here is the format that would need to be used for the export/import: BeerXML is a free, fully defined XML data description standard designed for the exchange of beer brewing recipes and other brewing data. Tables of recipes as well as other records such as hop schedules and malt bills can be represented using BeerXML for use by brewing software. BeerXML is an open standard and as a subset of Extensible Markup Language (XML). BeerXML is a markup language that defines a set of rules for encoding documents in a format that is both human-readable and machine-readab...

From what I remember of looking at it, quite a while ago, I did not like BeerXML. But I do not like XML in general. I think JSON is easier to work with and easier to read.

I use BeerSmith myself, but it is a bit of a love/hate relationship. I think it would be much better if BrewPi could integrate with a could recipe service, like BrewToad.

Being able to take temperature data and profiles, combined with a recipe, from someone else and load it into BrewPi with a few clicks, is the killer feature I think. Cloning recipes with almost guaranteed results.
Cloud is key here, so that’s why I would prefer a good cloud service.

Using beertools pro here (another beer xml). I find even importing these into beersmith or brewersfriend doesn’t fully translate. I would love the intergration though.

It is the killer feature which (if combined with the last few features we know are needed like direct actuators and multiple FV) would bring NrewPi right to the top of the pack.

It is tempting to say that cloud is best as BrewPi clearly seems like something that will head that way itself one day. But Im not sure for this particular feature.

Beer XML does look pretty flaky but I can’t help but feel that saving a recipe file directly onto the RPI server allows you more opportunity to clean up and migrate the file how you would like. Plus you have their app.

I have never used BrewToad. Maybe I am missing out!?

BeerXML is a poorly specified format - not because it’s XML but because it simply doesn’t give enough information. For example, units are not specified.

BeerXML 2.0 has been planned and worked on to fix these problems but no idea where that is at at present. There’s a forum at http://www.beerxml.com/forum/.

So even though we don’t like beer XML, we should probably use it as a starting point. The nice thing with XML is that via namespaces, we can always add more details as we see fit. Use what it offers as a starting point, for example, it has support for mash profiles: http://www.beerxml.com/mash.xml

BeerXML is a free, fully defined XML data description standard designed for the exchange of beer brewing recipes and other brewing data. Tables of recipes as well as other records such as hop schedules and malt bills can be represented using BeerXML for use by brewing software. BeerXML is an open standard and as a subset of Extensible Markup Language (XML). BeerXML is a markup language that defines a set of rules for encoding documents in a format that is both human-readable and machine-readab...

Despite the shortcomings, it’s the most widely used beer interchange format so we should support it, and extend it where needed.

While the beersmith cloud is pretty gay. Especially if you have more than 5 recipes. Or you wanna try doing a recipe a different way and just making and saving a change destroys the previous recipe. But it does have the benefit of working on just about all platforms including ios and android. So making changes on the fly is literally easier than finding a pen and paper.

Just wanted to check on this thread regarding Brewers Friend Integration/upload capability. I saw this mentioned in another thread but this looks like a more appropriate spot.
I guess it is safe to assume this level of integration will be in a future release and wanted to see if that is near or far on the planning timeline. Elco’s plate is pretty full currently (and probably his team).
Thanks and looking forward to my deliveries later this week to start playing…

Haha, I wish I had a team!
It will come with time. For now it is just Matthew helping to write the software, and Koen, a student mechanical engineering for a few hours a week. And my girlfriend helps me out with orders, stickering stuff, assembling.

It is a bit hectic managing the shop, software dev, orders, websites, servers, electronic design, mechanical design, accounting… I hope we grow enough to leave some of that to others in a year.

So I think it is safe to say that brewing software is a long time goal. We actually discussed leading an initiative to take BeerXML and make it decent. It is the universal standard, but it is not very good. We could take the standard and make it good.

Don’t we all! But if you need some help…

Did this ever go anywhere?

While I see your points about beerxml being weak (particularly in this user case with only having 3 mash steps??) I still think an export/import feature would be really cool. And beerxml is only real standard I see for this. We could all get involved with it the 2 specs…if their forum wasn’t broken of course

I’d recommend ditching BeerSmith and instead try out BrewFather. It does all of what this thread is asking for, and it also does a heap more cool stuff. It is what a brewing app in 2019 should be!

And where do I find the BrewPi integration in Brewfather?

Under the settings page. You will need to be a premium member, but it’s well worth it. 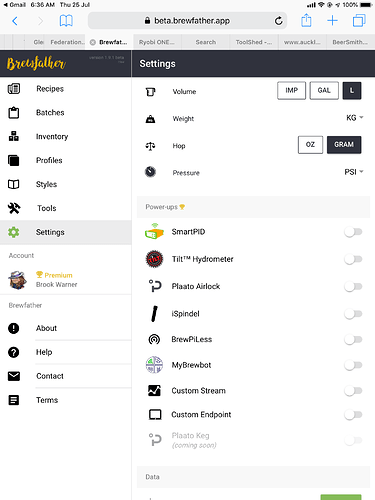 I must agree with @omphteliba, I can’t see any integration for brewblox/brewpi here.
Brepiless is the one showing, it seems to have this feature that is not available in brewblox/brewpi.

And TBH I still don’t get the point of brewpiless, saving few bucks to not have a raspberry pi ?
Or having the brewfather integration perhaps

FWIW: I’m using the “Custom Stream” option in Brewfather to feed in data from Brewblox. You can find it at https://github.com/robvdw2/brewblox_to_brewfather. It’s a quickly hacked together script (I simply run it every 900 seconds - the Brewfather limit - from crontab), but it works for me.

900 seconds is a long enough interval to benefit from using an averaged dataset, so I added that as an argument to query/last_values.

We keep running averages as separate datasets in the history database. This prevents the UI getting an aneurysm whenever it requests a graph for the last month.

You can set the policy option to one of the following:

autogen is realtime data, the others have 1 averaged value per listed period.

The change will be included in the next release. If you want to test it before then, you can override your history image by adding the following config to your docker-compose.yml