Cold crashing to achieve pitching temps has always been a struggle for me.

In another topic (Cold crash to achieve pitching temperature) Elco suggested changing beer to fridge maximum difference but I don’t think this is the best approach.

Here’s my last attempt (tried beer constant for a while the changed to fridge constant and switched back to beer mode when 20ºC was reached): 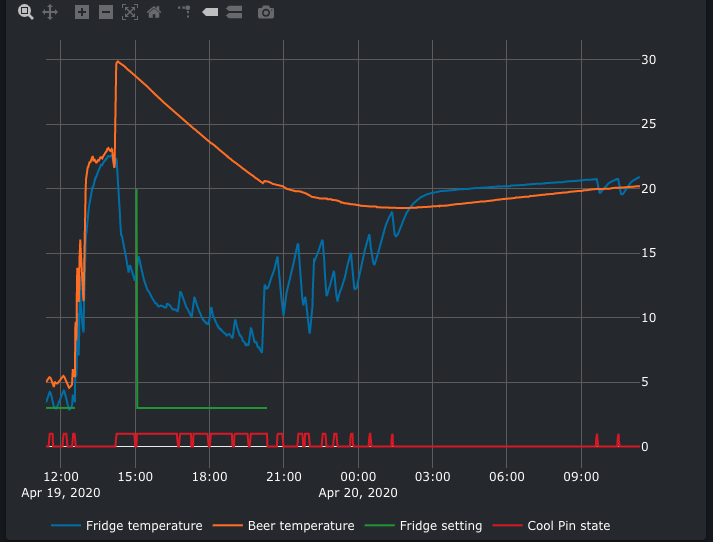 I would love a cold crash mode (or maybe tips to implement an Action that performs a cold crash and then go back to constant beer temp mode).

You could try to re-run the fridge wizard with our new defaults and see how that works for you.
If you only have this process set up, I would erase all blocks and re-run the wizard. You can export blocks first to be able to restore them if you don’t like it.

You have no fridge setting active, why? I don’t see a beer setpoint here.

Probably because I omitted it from the graph. 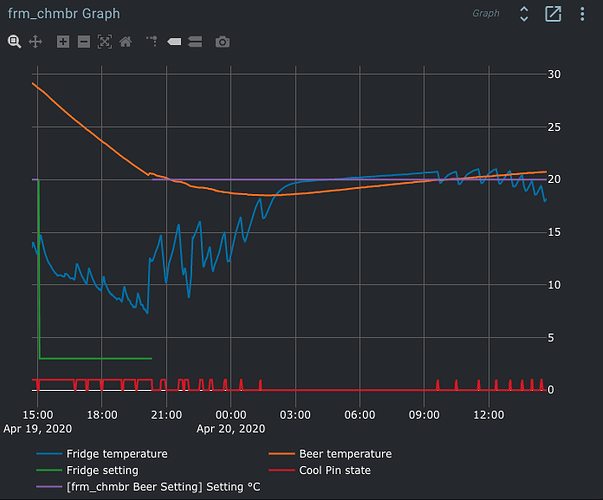 Do you still use the indirect control mode?

Yes I guess, haha. This is probably because I early adopted brew blox and my setup is from the time the wizard didn’t exist.

I’ll do what you suggested.

Right, what we see here too is that the beer setting is 20. So you were not cold crashing.
The direct setup is probably less confusing.

At the very begin of the graphic I started a “mini crash” (from 30C to 20C) to achieve the fermentation temperature (constant beer mode set to 20C).

I was expecting a “cold crash behavior”: deep lowering of the fridge temp to achieve the 20C as fast as possible.

As this behavior was not happening I decided to start the constant fridge temp mode (4C setting).

After the beer achieved the desired 20C I returned the mode to beer temp but this caused a little overshoot (beer cooled down to ~18C).

This is maybe due to the absence of a heater too, but I think if there was a crash option in the constant beer mode maybe this type of overshoot wouldn’t happen.

This is something you’ll want to tune using the PID graph.

If temp starts overshooting the setpoint, you can reduce Kp / Ti or increase Td, depending on what kept output high.

Support for conditional changes to config is in the work, but that’s a big project that we’re slowly but surely pushing towards release.

The beer is happily fermenting now. Next time I’ll test this behavior again.

I’ll start to cold crash the beer I had fermenting previously.

Took the time to delete all the blocks and create everything from scratch (with the Wizard help of course).

Everything went OK. I just miss an option to create a fermentation fridge without the heating part (I don’t use a heater).

Forget about it. I noticed there’s a drop down that shows the other blocks available. But opening another block was a bit confusing.

We need to make that dropdown a lot more prominent it appears.
The editor initially showing the wrong layout indeed is a bug. The fix is already applied, and will be part of the next release.

Builder layouts are not stored on the controller (and technically not blocks). Would you say that requires more explanation/attention in the UI?

I think so. I always thought the Layout as being part of the Brewery Builder block.

By ‘being part’ I mean ‘something inside’ and not a modular component tsh could be used ‘outside’ the block.

They actually used to be, until we decided to give the editor its own page. We also had had feature requests for builder widgets on dashboards being able to toggle between layouts, so we separated the concepts.

It’s very much like how dashboard widgets only use blocks on the controller, and not own them. (If you remove a dashboard, blocks still exist on the controller).
In software engineering these “reference” relations are extremely common, but we’re still working on how to make the concept intuitive in the UI.

All the great feedback does help a lot =)