I’m using my BrewPi for the first time on a home-built fermentation chamber. Basically an extension chamber for a dorm fridge. The BP is doing a great job of keeping the temp exactly where it should be, but I’m worried about how often the fridge is kicking on. Some details:

Here’s a zoomed out image showing the brew so far: 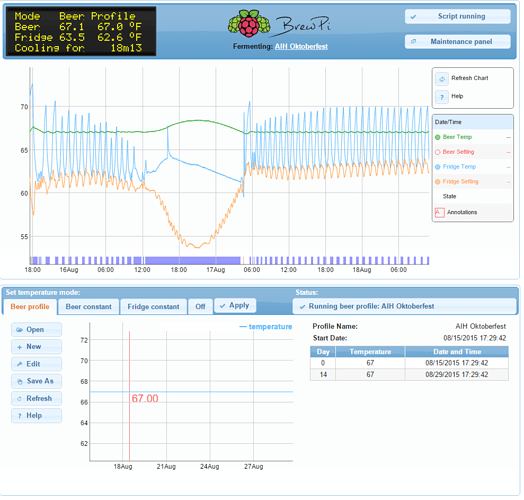 Here’s a zoomed in image: 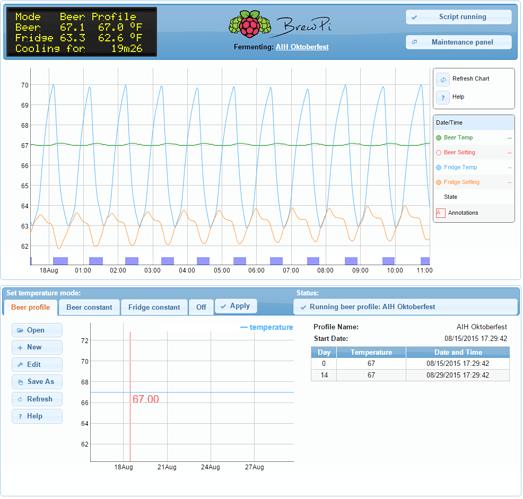 Maybe it’s not a huge problem - the compressor is kicking on for 20minutes every hour on average. I just don’t want to burn up my fridge if there’s a small tweak that can be made in software. Or maybe 20minutes at a time over an hour isn’t bad for the compressor?

Did you take the door off and build a insulated chamber that attaches to it? If this is what you did you have to understand that the cooling elements are meant to cool only a specific area and you are asking the unit to do a lot more than it was designed to do. Adding extra space is going to no matter what make the compressor work harder since you are asking more of it. I would suggest you make sure you have used a good insulator and that you have made the chamber as airtight as possible.

I did remove the door and create an insulated chamber (wood and R-5 foamular). Foam tape seal around the door I created, and aluminum tape everywhere else. I didn’t know if there were tweaks that could be made to the control values or to the “temp setting” of the fridge that would make it either cool for longer intervals, or (less likely) cool less frequently. I doubt the second is possible, as you are correct, it will depend wholly on how well I constructed the extension, and the fact that it’s extending the capabilities of the compressor, which is itself sitting in a hot garage.

I may try playing with the “cool” setting in between brews. Instead of a max setting, maybe a setting in the middle or even lower would cause the fridge to stay on more often.

For the sake of completeness, here’s a link to my build thread: http://imgur.com/a/WiQXw