I can start by saying that I , hopefully, have implemented the cascade PID as described in BrewBlox control chains. Throughout I have explored, discovered and worked with BrewBlox. I think I am beginning to get a handle on it and I must say that I am excited over this product.

I am in the process of comparing with BrewPi.
The BrewPi has

I assume that Mutex can take care of 2) and 3), but I am not confident about the settings.
I don’t see how 1) can be managed. Does it need to be?

The default settings for fermentation no longer use an indirect setpoint, so 1 needs not apply.
You can still configure it that way, but direct control already achieves .1 degC accuracy.

Max offset is implemented as a max constraint on the Setpoint Driver.

Min on/off times are achieved with constraints on the digital actuator.

Now I am getting this message. It comes quite often when I press actions. 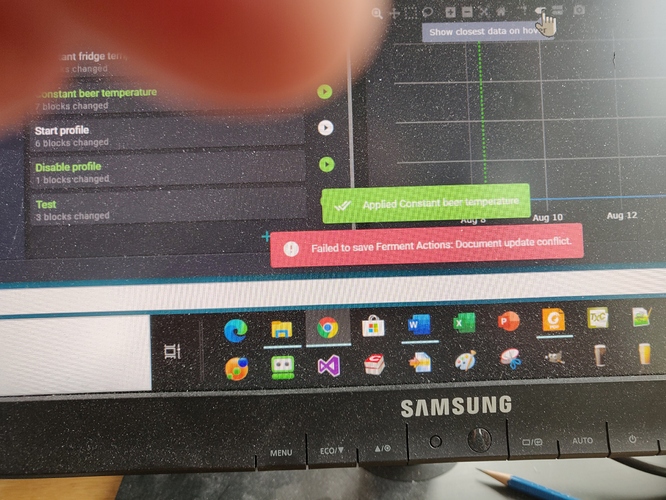 Thanks for the report! We’ll get that fixed in the next release.

Wonderful!
I can add that I usually have to press the action button several times before the action takes effect. Naturally, I wonder: have I pressed it enough times.
Do I have a notice when there is a new release, when about do you expect it to be on stage.
Again, I am very impressed by BrewBlox and the work effort you guys put into it!

If you get the green popup, the action was applied. Other widgets are updated the next time the service pushes block data (every 5s).

We decided against releasing an update just before Elco went on vacation. You can expect the update in ~2 weeks, after he gets back, and we tested the features I’m working on now.

Roger, thank you.
Just to be sure:
I now have the cascade PID up and running for fermentation. Now I want to implement a similar cascade PID for Herms. The two chains/processes are totally independent.
Can I install these two chains on the same BrewPi spark 3 unit?
Besides location of BrewPi Spark 3 units, is there any reason why I should want to go to two units?
Cheers

Yes, you can havee multiple independent control chains on the same Spark.
The main limitations other than physical position are actuator pins, and memory. You can store some 50-60 blocks in the onboard EEPROM chip. That’s comfortably enough for Herms + some fermenters.

The Quickstart wizard for Herms by default uses a Setpoint Driver between MT and HLT. You could run the wizard and then tweak the output.

Hi again guys,
Today I have another problem.
I can communicate with BewBlox from my PC when I am on the same network = in the same house.
When I go to a “far away” site it will not connect due to timeout. The date rate at the brewing site is 5/1 Mbps.
Where do I start with this one?
Cheers

Making Brewblox safe for remote access is still on the to-do list. Any solutions have to make sure you can only access the system after logging in.

You can set up your own VPN, but that requires quite a bit of technical know-how.

When I format layout on a dashboard: horizontal movements (pan and zoom) work well, but vertical attempts result in a stampeding movement.

Thanks for the report! Next release will include a fix for this problem.

The workaround in the meantime is to first scroll down the page a bit, and then move/resize the widget without pushing against the screen border.