This release is bigger (and took longer) than usual. We’re introducing new features, but we’re also working towards having a stable and well-documented API that can be used for hobby projects or third-party applications.

To make the automation service more flexible, we’re introducing scripted actions and conditions. These provide an alternative to the existing UI-based configuration.

Brewblox is gradually becoming more stable, and we decided now is a good time to add public documentation for block data types. This will help anyone who wants to listen in on block state events or use their own service, script, or application to read or write blocks.

Recently, we switched from AMQP events to MQTT. We’re very happy with how this turned out, and are now updating the eventbus service to run Mosquitto. This lets us use some very useful MQTT features that were not available in RabbitMQ.

The infrastructure for Spark discovery over Wifi has been improved, resulting in the removal of the mdns service.

While implementing automation functionality, the limitations of a fully UI-based configuration became noticeable. If the action or condition is repetitive, complicated, or uncommon, then it quickly becomes cumbersome or even impossible to configure.

Our solution is to implement an optional JavaScript sandbox for actions and conditions.

Some of the highlights:

Scripts are not a replacement for UI-based configuration.
They are an extension of the Brewblox design philosophy, where we build everything to be flexible and accessible, but add shortcuts to make the popular easy.
Here, scripts provide the flexibility, and the UI-based options are the shortcuts.

The script editor has multiple features to make it easier to write and test your scripts.

While editing, you can run the script in the automation service, and immediately see the output.

We also added snippet generators for common functionality. These snippets can ask you some questions, and will then generate code.

For example, the Get block field snippet will show you a dropdown to select a block and field,
and will then add the getBlockField() function call with the arguments already filled in.

There are functions to get and set block values, but also to help you check values.
For example, the qty(value, unit) function helps you write conditions where unit conversion is handled automatically.

With the introduction of the automation scripting sandbox, users can now access the raw block data.
To help with that, we’re declaring blocks a public interface, and added reference documentation.
Starting with the next release, we’ll use a deprecation period if we have to make any breaking changes to block data types.

In the 2020/06/15 release, we started to migrate from the AMQP event protocol to MQTT.
This release we’re making the MQTT-only Mosquitto broker the default image for the eventbus service.

We’re not aware of any third-party service still relying on AMQP, but you can switch back to using RabbitMQ if you want to.

To do so: add the following service override to your docker-compose.yml file.

Do note that the deprecation period for AMQP support ends 2020/09/15. After that, all AMQP events will be ignored.

Previously, Brewblox used a separate service to do Wifi discovery of Spark controllers.
We’ve revisited this design, and replaced it with a change to the avahi-daemon configuration on the host.

This means we now have one less service, and no longer use port 5000.
For more details, see the decision document.

This change does depend on the host environment and network layout.
The change to Avahi settings is kept optional, and we mapped multiple alternatives. If you want to run Brewblox on a system without Avahi, or are having problems with the new settings, feel free to drop us a message.

Brew kettle produces a control chain for a single input/output heater, comparable to the BK in a HERMS setup.

Fridge without beer sensor produces the same output as the Fermentation fridge wizard,
but without the beer mode controls.
This is useful if you wish to (temporarily) use your fermentation chamber as a normal fridge.

We can’t magically decide what the purpose is of a newly discovered sensor, but we can help with identification. Most wizards now start with a discovery step. Here you are shown the current status and measured value of available OneWire sensors and chips, with prominent “change block name” buttons.
Unplug a device, and one of these blocks will suddenly have a disconnected status.

Wow thats a big update!!
When I run the update I get the following. When I run the pip3 instal… I get an error that it is not reconized. I run brewblox on a synology NAS btw.

You can run the suggested command (pip3 install etc), and then retry the update

the alias pip3 for python3 -m pip is missing.

I tried but I get the following:

Elco made a typo and omitted install. I updated his comment.

Got it working! thanks!

I can’t seem to find where I toggle this pause status. Any ideas?

The spark-one service seems to be throwing the following error:

resulting in the removal of the mdns service.

I tried flashing the firmware over usb to see if that fixed anything. For some reason I was thinking that the update script would prompt me to flash the firmware if necessary.

I noticed that it goes back to the original error if I disconnect the USB:

I seem to be having a similar problem. 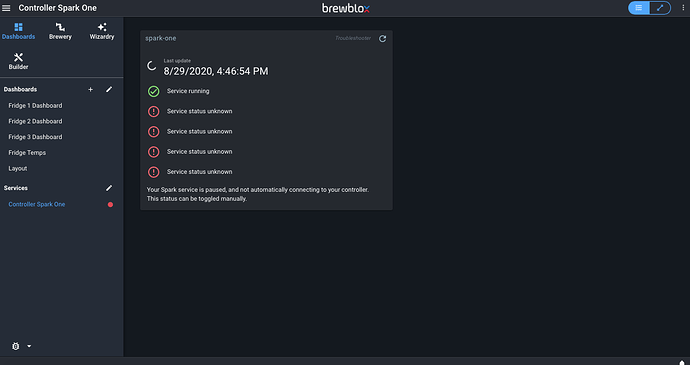 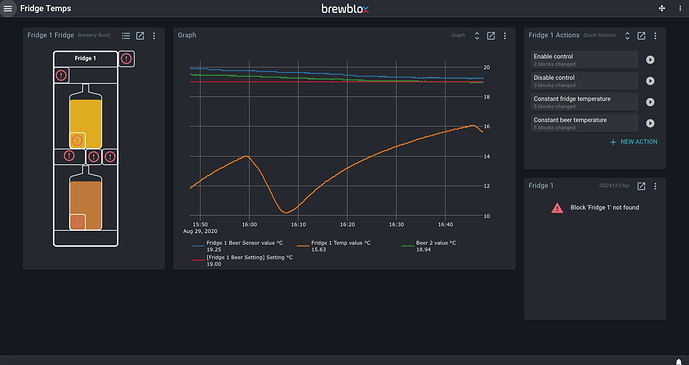 @adempewolff @Trig The “pause autoconnect” button is an issue on our end. It should be fixed after running

@adempewolff It looks like we made a typo when deploying the backwards compatible rpi-${BREWBLOX_RELEASE} image for the spark service.

Pushed a fixed version now, but you can also clean up your config by running:

If you’d rather not update your config:

Thanks. The new UI adds a resume auto-connect button, but clicking it doesn’t appear to do anything. I’m going to move on to the real fix now, but just wanted to give this UX feedback first. 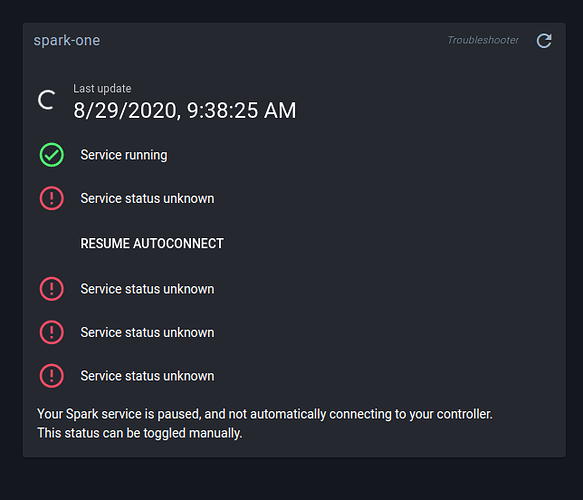 edit:
The service connects to the spark correctly after the add-spark -f command. Looks like everything is working correctly now. Thanks!

The new UI adds a resume auto-connect button, but clicking it doesn’t appear to do anything

The formatting of the service status event changed this update, so that was to be expected if service was not updated yet.

The service connects to the spark correctly after the add-spark -f command. Looks like everything is working correctly now. Thanks!

Good to hear. We’ll probably have a look at auto-detecting and migrating the rpi- prefixes in config. They’re no longer required, and the backwards compatibility apparently has become a source of bugs. 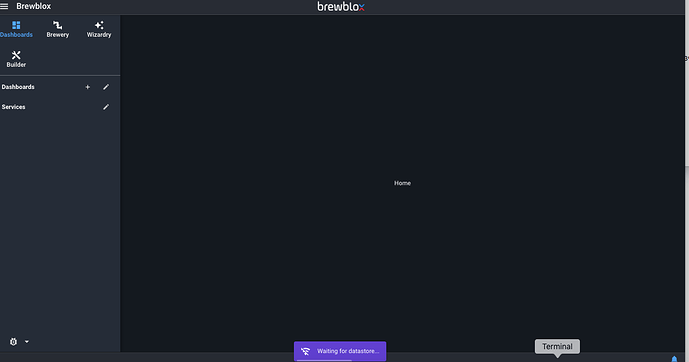 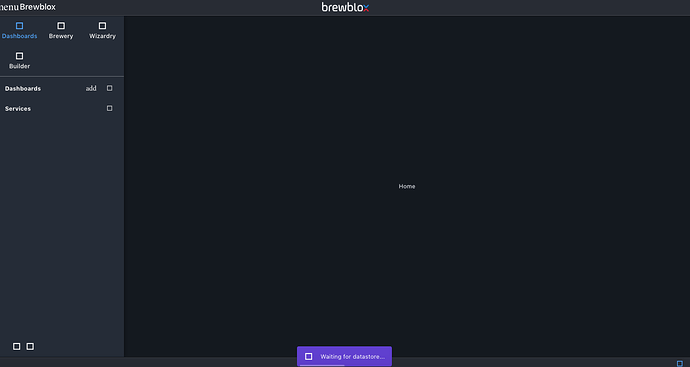 Just checking: what is the age of your SD card? The datastore is often the first to notice EOL read errors.

If you run docker-compose logs datastore, does it print its welcome message?

Not sure but several years, ~5. 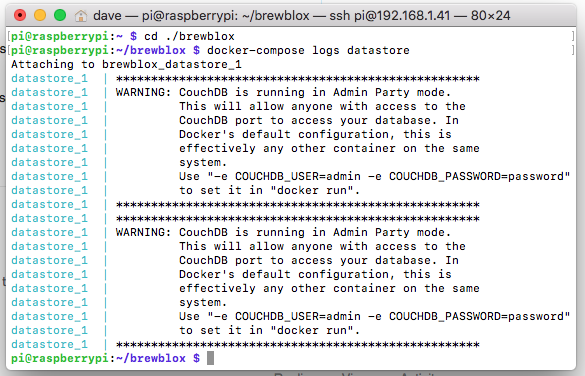 It may come online in a minute or so, or another restart may help.

I do advise making a backup and storing it externally. Continuous writing to SD cards (aka. history data) is not great for a card’s lifespan. Datastore troubles may be an indication disk sectors are reaching end of life.

I have just re-run the ctl update and all appears ok.

Thanks for your help.