I stopped brewing several years ago because I was frustrated that I was unable to control fermentation temps and wasn’t getting the final results I wanted. We didn’t have the space, time or money for a dedicated fermentation chamber. Now, I have more time and money so I returned to the hobby. I do small batches using the PicoBrew Zymatic. A full all-grain system would be great but I’m still space constrained and Domestic Harmony requires sacrifices.

The household budget director gave me the go ahead on buying a scratch & dent wine fridge with the stipulation that I couldn’t alter it such that it couldn’t be used as originally intended. She thought I might give up brewing again and having more wine space wouldn’t be a bad deal.

Brewing a couple of batches last fall learning how the system work proved I was on the right path. I needed to make my setup more permanent and wife friendly so during the holiday (aka: no-brew) season I decided to build a control box to house the components. The box had to be electrically safe and easy for my wife to monitor/restart while I was traveling for work.

After a lot of searching I settled on a DIN mounting system and bought the components (Mouser and DigiKey are great). Switchcraft had almost all the data interfaces and Neutrik had the power connectors I needed. I had a mounting plate designed to accommodate all the interface modules and allow for some growth. Being able to quicklty disconnect the box from the sensors has made troubleshooting much easier.

This is the only hole I’ve made in the fridge. I was able to leave the drain system intact and correctly guessed from the layout that the only thing I’d be drilling was insulation. 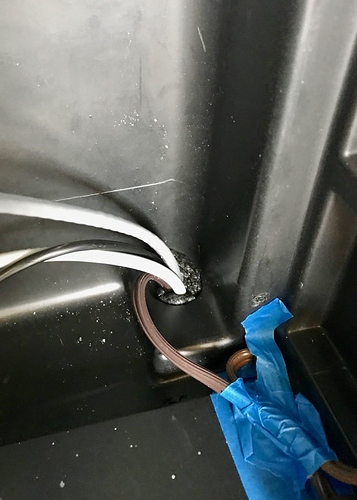 This is the completed fridge interior with OneWire sensors and 8” fan in front of the small original fan. 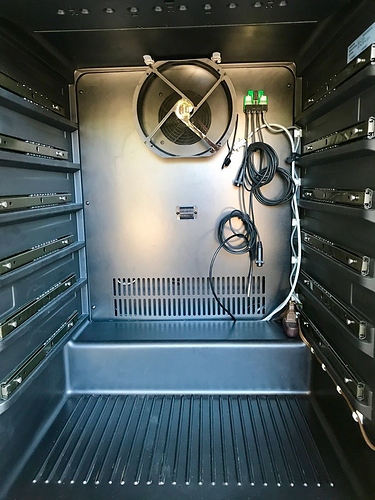 I use a Fermwrap mounted on the door for heat. Since the fridge is in the garage I used external bubble insulation to increase the door’s R-value. 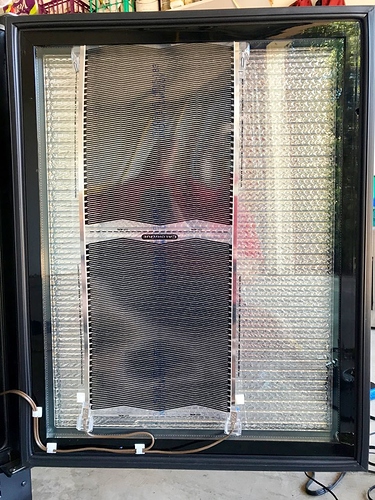 After modifying the opening for the cords, the back of the fridge is tidy and the unit is easy to move. 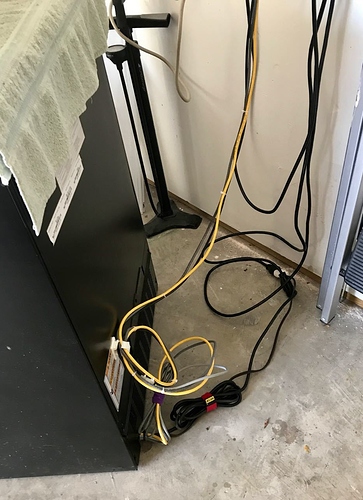 The Zymatic uses kegs for fermentation so I punched holes in them and mounted temperature probes from BrewPi. There hasn’t been any issue with leaks and they hold up to normal fermentation pressure. 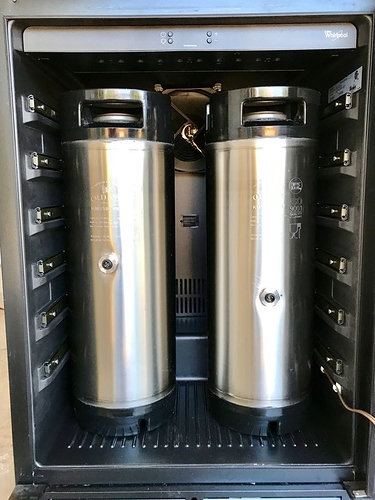 I thought the control box enclosure was going to be too big but it turned out to be exactly correct.
Starting left to right:
row 1: 12V and 5V DC power supplies, wire distribution nodes, surge protector
row 2: Raspberry Pi, Brew Pi, AC SSRs for heat and cold 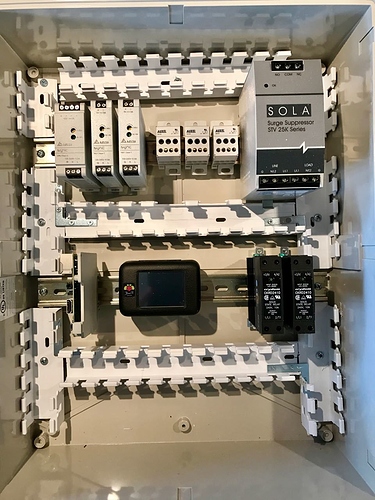 Fully wired. The ON/FF switch is mounted on the lower right,
The small LEDs are the standalone sensors displaying the current fridge temp and control box temp. 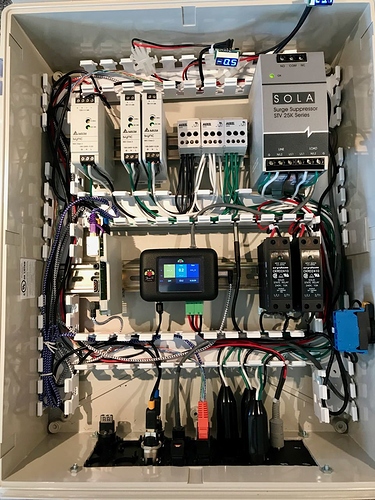 Mounted on the garage wall up and running. 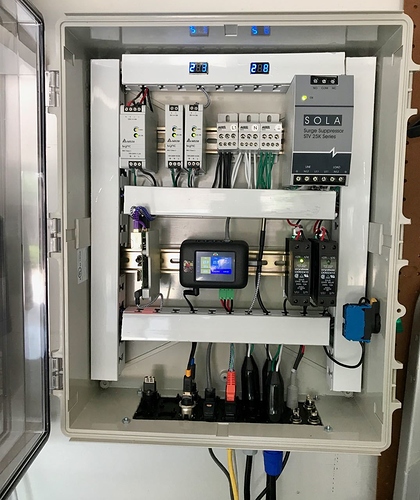 Overall I’m happy with the result, and my wife has said she likes being able to see what’s going on.

Thanks to Elco for the BrewPi and equipment. You’ve helped me get back to a hobby I enjoy.

It’s been a great help seeing what others are doing with their systems, thanks to all the contributors for sharing.

Nice control box! Did you custom make the DIN rail mounts for the Raspberry Pi and BrewPi? Do you have a picture?

There is a mount made specifically for the PI by DINrPlate. The mount is a bit loose on the rails but held the Pi very well. My Pi Model 2 fit fine…

For your heater issue, check in the control algorithm tab for the value of heater1. If it is at only 10%, that could explain why you don’t feel any heat.
You probably just need to increase heater Kp, so the duty cycle of the heater is higher.

Last time I asked about this you made the same suggestion but, I’ve been reluctant to make too large a change.

The outside temp this morning was about 9C with the garage holding at about 16C. With the Kp set to 15%, the beer temp held steady at 20C. I think that’s as good as I need for now.

One of the great features of your system is that the default settings work so well.

The first version of this control setup used a SSR cycling power to turn the fridge on and off with the internal thermostat set at it’s lowest temperature. The temp limitation and the constant cycling of power made be search of a solution that would allow accurate colder temperature control and leave the fridge powered.

After some research and testing I came up with a method of bypassing the internal thermistor using a potentiometer and a low voltage relay.

I ran a wire from the thermistor header to the VCC input on the potentiometer via COM and N.O. on the relay and ran a wire from the SIG side back to the other pin on the thermistor header. When BrewPi wants to start cooling the relay closes allowing the adjusted voltage to be read by the fridge controller and start the compressor. When cooling is no longer needed, the relay opens breaking the circuit. The fridge will show an error on the temperature display and stop the compressor.

I mounted the relay on a DIN rail adapter and attached the potentiometer using velcro. 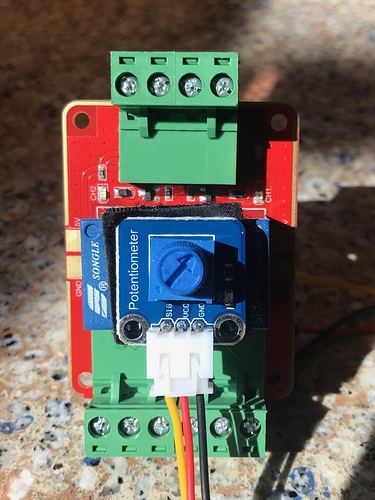 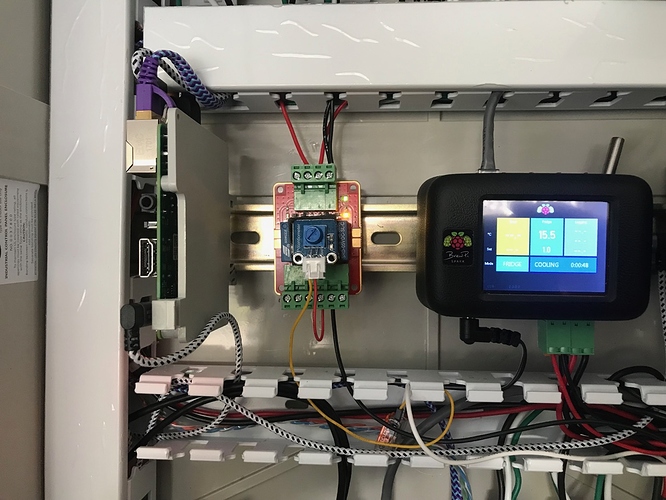