I was wondering if anyone had ever tried to use a BrewPi to control the temperature of a small, well insulated room (let’s say 8ft x 6ft)?
I’m looking at building a ‘cold’ store that I want to keep at 12C and if I can find a suitable heater/cooling device to connect to the BrewPi then is there any reason why it wouldn’t work?

I guess the hardest part is finding a cooling unit… maybe an air conditioning unit? I’m not sure how well that’d take to being switched on/off all the time however??

If it’s not possible using BrewPi does anyone know of a similar solution that would work? I’ve seen CoolBot, but this doesn’t deal with heating.

That would work just fine. The biggest issue is to find an air conditioning unit that you can turn on and off easily.
Most units will not start when powered on and need some button pressing.

You’ll be able to adjust minimum ON and OFF times to avoid frequent cycling.

Hmm yes, that’s what I thought. Finding an air con unit is the tricky bit.

Ideally I’d want something super basic which when switched on continuously cooled. A quick google suggests that something like that doesn’t really exist!

I had a similar project where I wanted something to turn on when power was applied, but the device itself needed a button pushed to operate. What I ended up doing was opening the device, figured out which circuits were closed when the button was pushed, and then soldered in a basic switch that was then controlled by an arduino. The arduino was running a very simple script of when powered on wait 5 sec then close the circuit for .5sec and then re open it and then stop. So that way when my logic module said turn on it would turn on power for the device and for the arduino. Five sec later the device would turn on, do its thing and that was it. Now I don’t know how advanced the circuitry of an A/C is so that may make this method a little more difficult.

I just use a mini fridge with wood/ foam box around it. I have a fam recirculat8ng the air. Works quite well, can get down to 45 after I sealed all the cracks 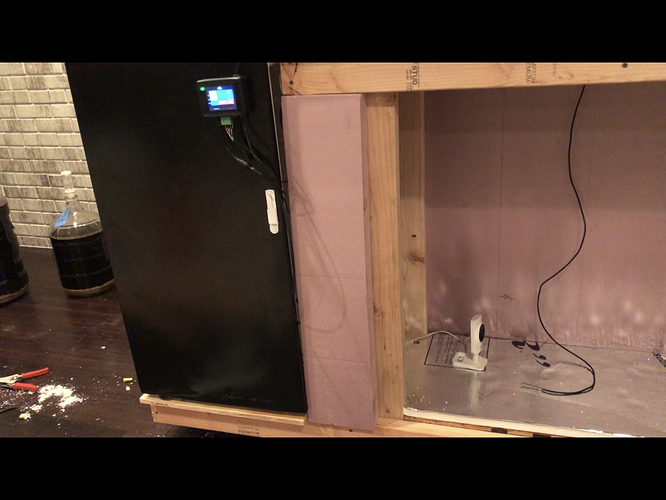