I’m starting my own fully automated nano-brewery build, based on the BrewPi!
i took some of the drawings from Elco from his HERMS setup, added a few modifications on my own (more automation, single shut off valve, fermentation conical from SS brewtech, water flow meter and an integrated kettle for cleaning solution).
I want to document what i’m doing here so let’s start off with my Diagram!

I’ve bught the HERMS basic setup for the kettles, i’m thinking of finishing this in a month or so, and then i’ll start building the valves portion…
I know Elco is hard at work with the PWM setup and adding the valves at a later stage, but i’m in no hurry

until that time, any feedback is greatly appreciated!

I think if you re-arrange the parts a bit, the drawing might be easier to follow. It is a bit hard to see what’s going on, compared to ours:

We are working on a new HERMS build guide, the schematics above are for the cluster below. 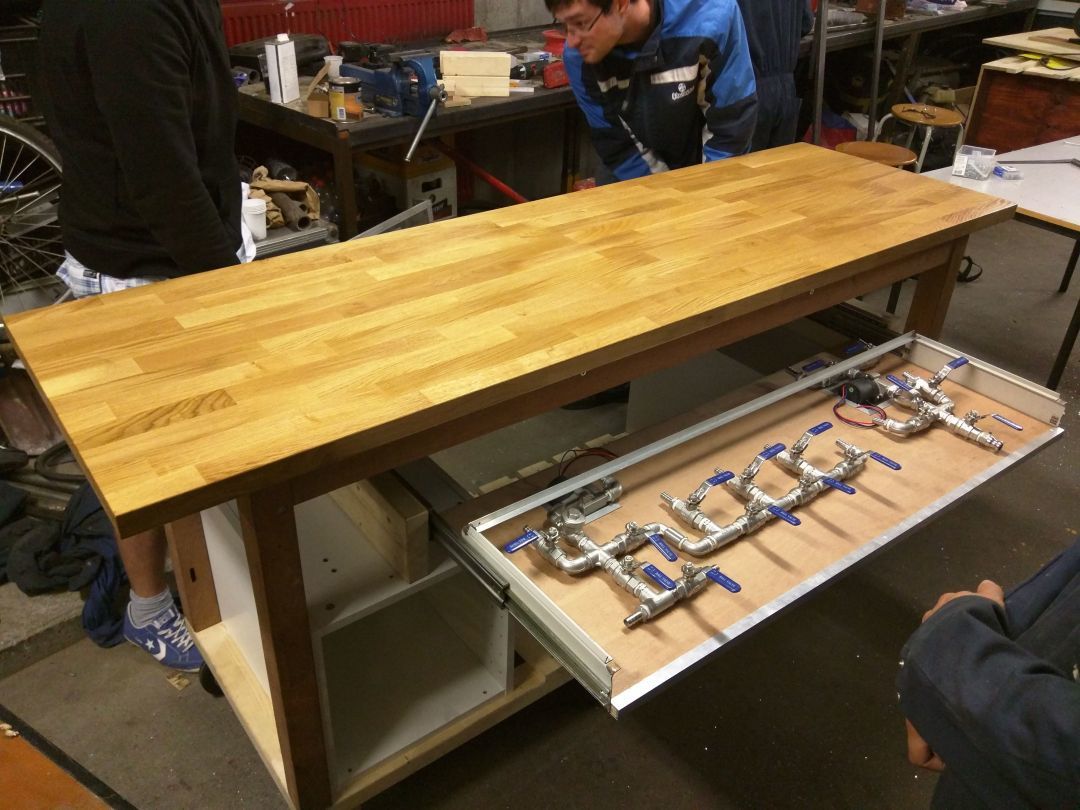 so i took the advice and simplified it 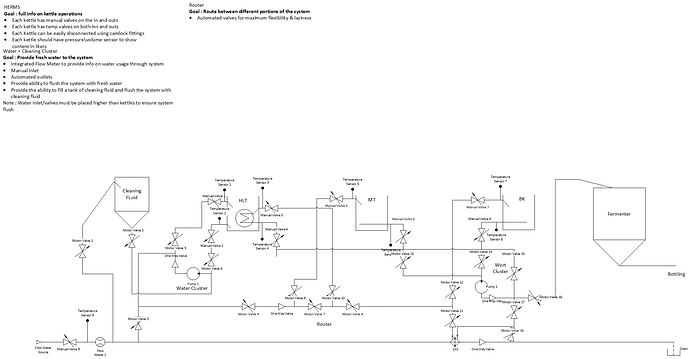 as a general comment to my drawing;
I’m looking into giving as much insights and control as possible. yes, i want the end control in my hands, so a manual valve for bottling and water in definately is required, but i want to automate the whole rest of the process. for me the building and designing it is as much fun as the brewing is

I am not sure the cleaning tank is necessary. You can also just dump it in one of the kettles and start pumping from there.
You also have one way valves (check valves) in series with motorized valves. What is the point of that (nr 4)?

And why motorize valve 16? When the brew is done and you are ready to pump it to the fermenter, you can just attach a hose and open the valve.

thanks Elco!
my thoughts behind it are this;
the cleaning tank is more of a, it’s easy to add today so why not? it would allow me to make sure i have the correct amount and i can mix it up before i flush it through. it also allows for a full flush since i could potentially add it everywhere. it’s an extra 100 bucks and gives some flexibility…

as far as the one way valve, I took that from your drawing, but I think that’s because in your drawing you have already taken hoses into consideration and the one way valve makes sure once you go into pumping the beer through the tanks, you don’t mix with any material that is left in the hose in a previous process. for now i think you can ignore those one way valves, i’ll add them during the build where necessary. i understand they prevent backwash and iu’ll use them that way.

If something gets automated, there are usually few reasons like lower the cost of production (less human labour), getting the same result every time and so on.

What is your reason?

Looks like a massive waste of cleaning fluid. Read up on CIP systems.

haha. while that is true in general i both like automation and i’m lazy

this would allow me to have a seperate place for preparing the cleaning solution. does that make sense?

BTW; Star San is an acid-based no-rinse sanitizer not cleaner. For cleaning, use something like Five Star PBW

PBW might be better, perhaps i’d use a combination. have to read up on that.

I have a 60 l system + SS 50 l fermenting vessel.
This requires about 3 l of StarSan in total. Wasting sanitizer (StarSan) on a boiling system is pointless.

For cleaning, I need about 10 l PBW to submerge heating elements but if I had a pump (like you do), I’d only need about 2-3 litres to get the whole boiler and mashing unit cleaned and another 2-3 litres for a 50 l fermenting tank.

Why so little? Because of CIP spray ball magic

that is great information!
it seems i have very much overestimated my needs… seems i need a way smaller kettle for the cleaning fluid

do you have some background information on your build ? would love to learn…

You don’t need to make a tank for oxiclean / PWM. Just dissolve some in one of the kettles and start pumping. I plan to attach a CIP ball to the hose I have on the HLT input.

@Elco , permanently? or just for cleaning?
i looked into the CIP ball and that seems pretty awesome… thinking of creating something smart for this

no just put it on the hose for cleaning, not permanently.

so. since it’s been quiet for a while… i have actually beenbuilding. will build a bit more next week and update 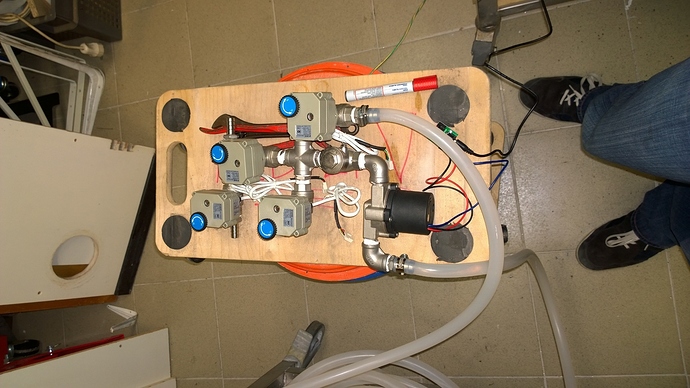 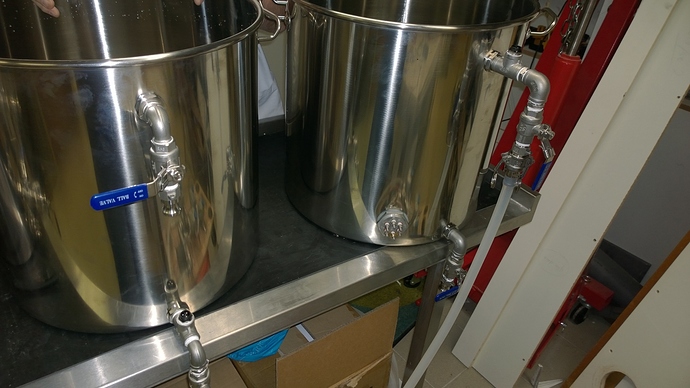 Hi to both Elco and Korneel

I am also planning to build a fully automated Herms-Setup. (Not sure if the valves should be automated)
Since i don’t have the required time to do experimentation i am waiting to see someone put together a complete build with schematics and parts-list.

I would like to buy most of the required parts BrewPi-Store, to ensure that i get it right.

Elco:
How far are you from publishing a build with, schematics and required-parts list?
Could it be an idea to create a “Complete Build” pre-filled shopping cart in your store?

Korneel:
Impressed with your work there ! Keep going strong, and appreciate your sharing

progress has been made

I’ve finished the cold water intake and the water cluster and the router portion. I’ve taken Elco’s deployment but i’ve added some flavor of my own by adding more temperature sensors. I figure that with the cost of the sensors, you can never have too many… 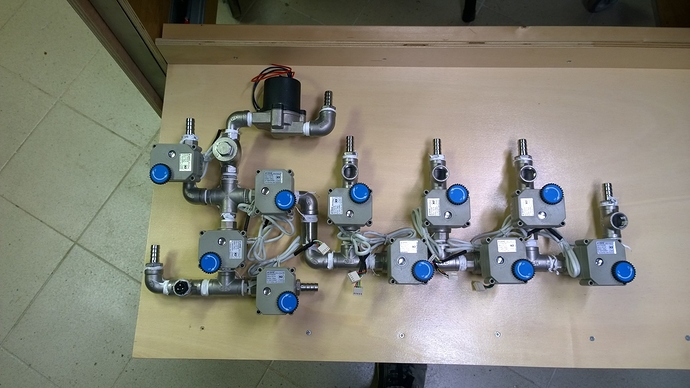 did you complete the HERMS Build Guide ?