Getting ready to do a water run with my Brew_Pi Spark. It will be running a commercial glass door cooler with a 200 watt heater added. Pictures soon to follow. Any first run pointers and or settings that I should be changing ?? This build was reasonably easy as I have been in process control for a lot of years. Thanks in advance !!

I think the default settings should be a good start for that setup.

One you have some data and can share a graph we can fine tune.

After doing this the IP address still comes back as 192.168.50.219 coming from my router.
Not a show stopper to do a water run (tonight, I hope) but would like it to be static.

Any thoughts on what I’m doing wrong ?? Thanks

I recommend leaving the IP on automatic from DHCP and configuring a static lease on your router.

That will be much easier to handle if you’re router configuration changes.

Okay, I’ll have to investigate static lease on my ASUS router…
Checked it out and will give it a try. Looks to be easy on this router.
Thanks for the quick reply !! 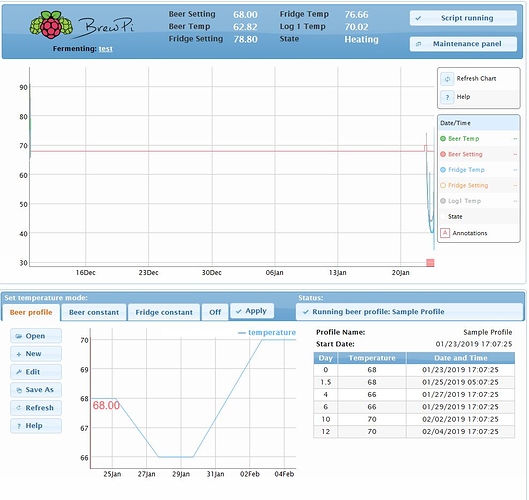 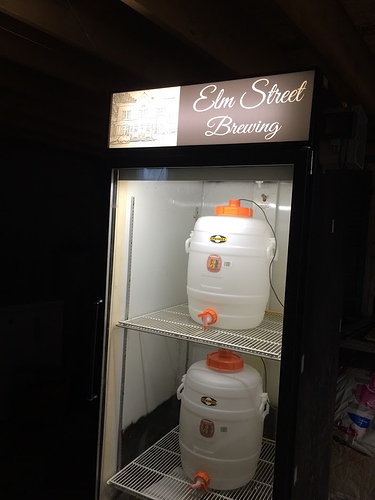 A picture of my hack… Better ones to follow. Brewing this weekend if the water run is successful !!!

So, water run went without a hitch. Control was very tight within ~ 1/2 deg F. Doing beer this weekend. Having not used Brew-Pi I came up with a question… In between runs of beer do others shutdown the Raspberry Pi server and Brew-Pi ??? Or is there an idle mode that it can be set to ?? What do others do ???

If you set the mode to OFF and stop the current brew, that’s no cooling/heating and no data logging.

Jep, just stop the current brew. I turn off the Pi in between but be sure to shut it down properly instead of pulling the plug - it can corrupt your SD card!

I have another question… I think I read somewhere that the outputs are good for a certain mA output. I have these relays that I would like to use a Brew-Pi output to turn on the lights in the cooler. So will these work ??

Only 20 mA. I highly recommend using SSRs instead of mechanical relays. If you are using mechanical relays, you should also use a diode to protect against back EMF that could damage the output. 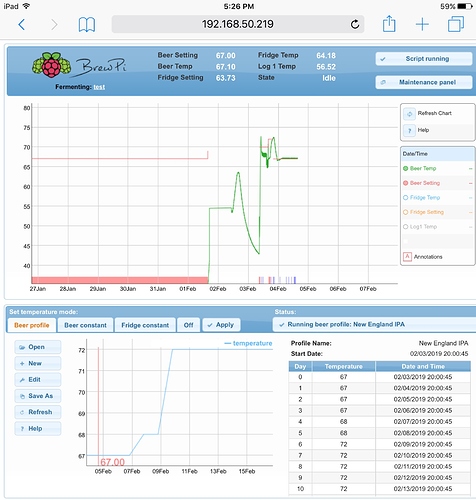 Today question… Running the first beer batch and holding temps perfectly !!! Using my beer profile “New England IPA” and seems to be running it. Question is on the top under the Brew Pi logo it says fermenting “TEST”. Shouldn’t is say New England IPA ??

It seems you didn’t start a new brew. Where is says ‘test’ is where you can choose to stop or start a (new) brew. You could do that now if you wanted.

By the way, in the temperature profile, you don’t have to set a temperature each day but you can choose longer period!

You can do something like 68 degs for 3 days ?? I wasn’t aware of that. No big deal with the fermenting name, I’ll remember to start a new brew next time. Thanks for the help !! 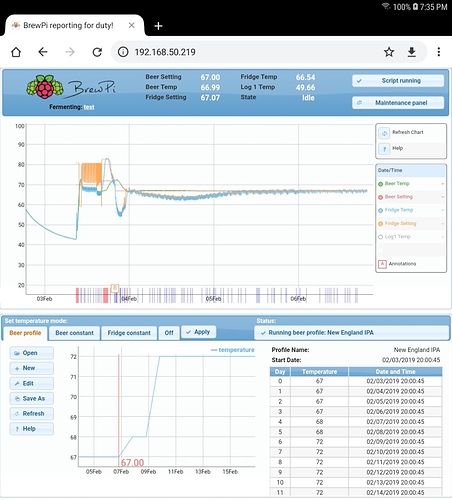 So here I am 2 days in… I’m thinking this looks real good ?? My error at the start, day “0” had no temperature value. since then, I think it is working as it should. Any comments / suggestions ???

The profile is a combination of points. It will interpolate between them. You can also enter 1d2h.

Not sure what you mean… 1d2h as the display of the graphed data ??

Finished the profile for the NE IPA perfectly !!! Finished with a cold crash last night, went fro 72 degs to 40 degs in around 7 hrs. Couldn’t be happier with the performance !! Thanks for all the advice Elco and others, I think I have the hang of it !! Next week an Irish Stout !! 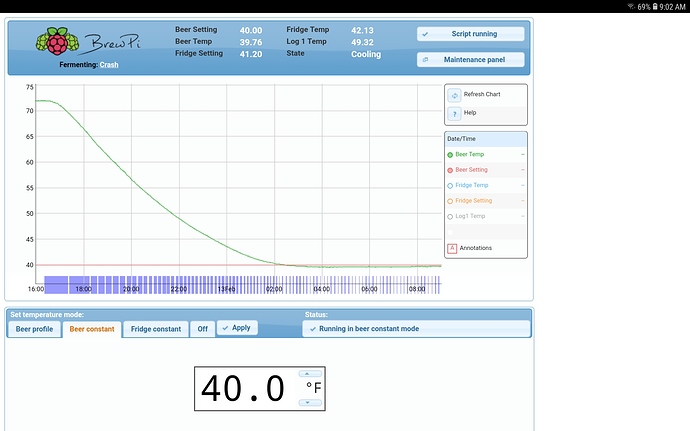