Hello,
I have my first beer fermenting away with the brewpi. I am noticing that the fridge temp is being set by the brewpi to be lower than the set beer constant temp of 68F, as well as lower than the actual beer temp. Is there a reason this is happening? I would think the brewpi would want to heat up the beer since the beer temp is lower than the beer constant. Is it just slowly ramping itself back up to the 68F range (to prevent over shoot)? Can this be adjusted?

I have the beer temp probe in a thermowell inside the fermenter. And the fridge temp probe hanging about midway in the chest freezer.

I notice in the advanced settings that Beer-to-Fridge derivative time constant (Td) is recommended to be set at zero, but it is at 1200 by default. Should this be set at zero when fermenting? What does this do? 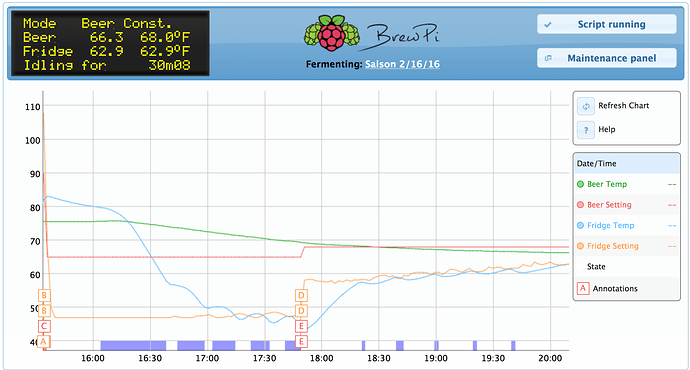 I think this is caused by integrator windup in the PID determining the fridge setpoint.

Between 16:00 and 17:45, the beer temp was not adjusting quick enough, so the integrator part was increased, resulting the in the fridge setpoint staying about the same even though the beer temp decreased.

This integrator was only slowly reduced afterwards. In the next release (0.4.3) the integrator will go back to zero more quickly due to algorithm changes and this will be less of an issue.

If you want the fridge temperature to adjust quicker, you can increase Kp and decrease the integrator time constant.

Thanks @Elco. Things evened out over about 12 hours or so. Everything is looking great now. I look forward to the next release (0.4.3).

@Elco, one other thing I’ve noticed, is that the brewpi only kicks on my heating source for maybe 10 seconds at a time, then turns off. I had to adjust the Heater PWM to 60 seconds as the default 4 seconds was causing the heater to trip and I would have to reset the heater each time this happened. Is the heating source only turned on for a short time, then off, because of integrator windup in the PID?

What kind of heater do you have? IF it does have a startup time, setting the value to 60 is a good solution.

I have the Lasko small personal heater that everyone mentions around here, but is not recommended to use. It actually works pretty well, even kicking on for ~10 seconds will raise the temp pretty quickly. Setting the PWM at 60 seconds definitely fixes the problem.