I’m using my brewpi to control a fan in a Son of Fermentation Chiller setup. In my test runs I was able to bring ambient temperatures down to about 15C.

I haven’t added warming yet, so at night the chamber temp gets lower than it should. For now I can just work on tuning the cooling. One change I attempted is setting minimum rest and activation times to 0 since I’m not running a compressor.

Here’s a log of the first 24 hours or so of my current brew. 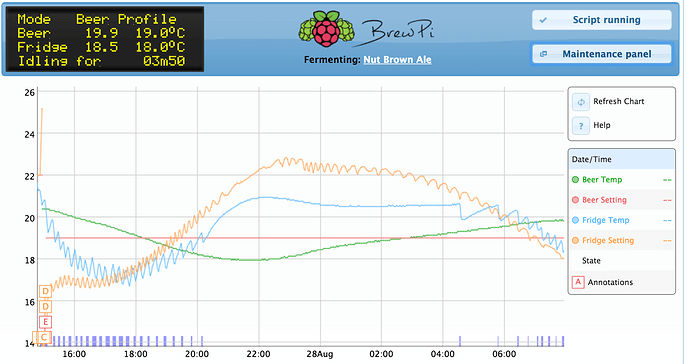 Increase cooler Kp by a lot. You want the fan on continuously if the temp is 2 degrees too low -> Kp 50.
Use a short PWM period, for example 3 minutes.

Is that the Beer to Fridge Kp or the Cooler Kp?

Cooler Kp. The fridge seems to be fine for your beer temp.

Here’s the trend line since making the changes. The cooler temp is definitely tracking the target temp much more closely. But it looks like it keeps cooling a bit after the beer temp hits target. 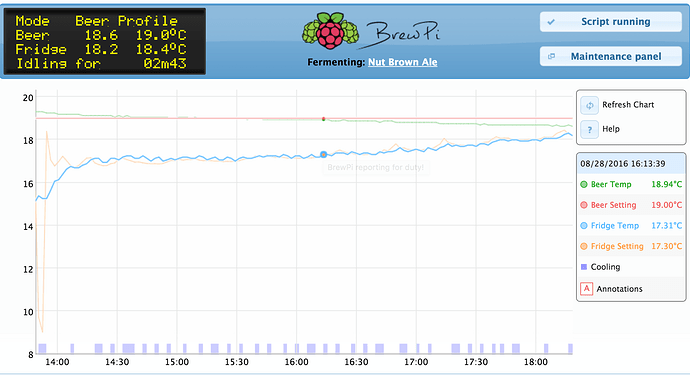 Jkyle, Elco, and anybody else who has used a Son of Fermentation Chiller with Brewpi–

I am getting ready to test run my own SoF chiller. The beer chamber is about 50% longer than the official plans so I am expecting the chamber not to be so efficient with more frequent ice changes. This is so I can fit an extra carboy. All I have done so far is construct the chiller and get the brew pi to turn on a fan based on ambient temperature but have yet to marry the two projects together.

For device configuration, should I have the cooling method be listed as a fan or as a fridge cooler? I am using a 12v dc fan that will be controlled by the brewpi arduino, no compressor whatsoever.

Jkyle, did you ever add a heating element to your chiller or did you go with something like a heat wrap? Did it work for you? I was thinking of not having a heating element at all given the flammable nature of foam insulation.

Thank you in advance.