Has anyone already looked at vombining the Ispindel with the BrewPi? 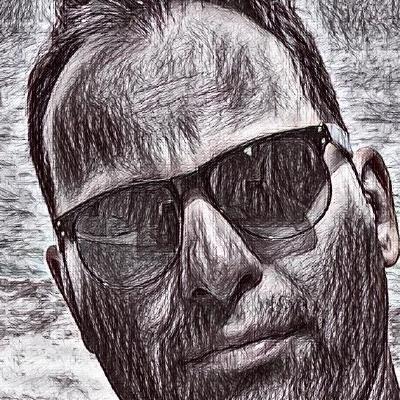 
It offers similar functionality as the brewometer, only it works via wifi. It costs around 40-50 euro, so it’s a fairly cheap. I’m missing the programing skills to pick up such a project, but would be nice if both can be combined.
1 Like
Ken_Vejbaek May 10, 2017, 3:27pm #2

Hello
We are a few that just have ordered a couple of ISpindel’s from 3D-Mechatronics.de. As soon as we have the device up and running we will share our experience. We do not have plans on integrating the device into BrewPI in the first place.

I’ve been excitedly following that project as well!

Hello I have also the ispindel device in my hand any news for integration or how to show info from ispindel to brewpi?

Hi, I’ve ordered one of these too - I’ll try to hack the output onto the brewpi graphs when I get it; any help appreciated.

Seems like a nice idea - and relatively inexpensive. Would be nice to show how the gravity is moving, and identify any stalling.

Hello scrauny i think that i have not the skills to hack the graphs but if you think that i could help you with this sent me a message its really intresting!!

I’ve built the iSpindle, it’s been happily reporting to Ubidots (https://app.ubidots.com/ubi/public/getdashboard/page/eiYNxh-MzFavfCwMRXn1bzwx7Xw) for the last week while sitting on my desk

I’m just waiting on the tube to arrive so I can try it out on a brew.

I’m very keen to hear if anyone’s managed to include the iSpindle info on the BrewPi chart. It looks like the BrewPiLess folk have managed it, but I’ve not seen it for BrewPi.

I, too, have most of the parts for one (well, probably two) of these on the way as well and have been looking into how to integrate. From what I can tell is we would need have a page (.pl, .asp, or…?) that would take the HTTP GET request and add the required data to the database to allow the iSpindel post its readings to the BrewPI. Then, of course, add that data to the graph - but I think this has been done with the tilt/brewometer data already so that part shouldn’t be too hard. When I get a little bit of free time I will take a snapshot of my BrewPI machine and poke around a little bit.

Which tube/sled did you use? I have some XXL preforms on the way, and looking for a local library to 3D print some sleds.

I think I can have this working before too much longer. I think I have the graphing part worked out for the most part and hope to generate some test data soon.Going to take data from an old brew and generate some fake spindle data and see if it graphs.

Then I need to get the data form the iSpindel into BrewPi. Getting the data measured and into a CSV file is strightforward, from what I can tell. From there I just need to have the BrewPi scripts add this data as additional columns on the JSON and CSV.

I can test just about all of it except the logging from the device to the initial CSV - the rest I may need to wait for my parts to come in.

I’ve ordered a big testtube from AliExpress: http://s.aliexpress.com/aIB77naQ and I’ll print a tray to fit…

I’ve built the device in a lower profile than the instructions suggest. I’ve used surface mount resistors and the standoff between the boards is pretty small, so hopefully it’ll fit in that testtube, I don’t think the standard version of the device would fit.

It looks like the BrewPiLess project have intergrated the data, so I’m guessing it should be possible for BrewPi. In the iSpindle config, you can choose various output types, eg. HTTP, TCP, Ubidots, etc. 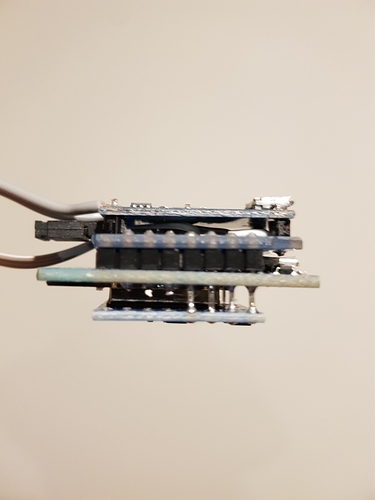 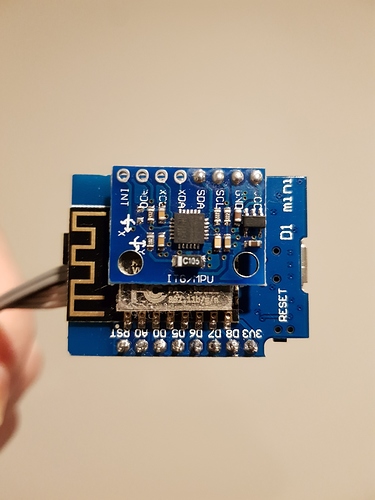 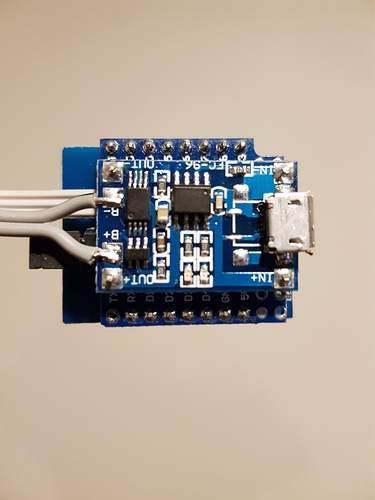 I like how clean and compact that came out. I’m still a month out at least on some of my parts so have a while to sort it all out…

Yes, I was looking at the BrewPiLess and considered going that route, and if I cant get the integration going may still go with it. That being said - Working with manually created data (sample data and added to it) I have pretty much got the graphing worked out on my test machine and will throw it on my production one when my current brew finishes this weekend.

Getting tha data in shouldn’t be much harder. I looked at both the HTTP and TCP options and think both would work. Have an idea for each way and will start working on that soon.

Hi Ken,
Do those units come assembled or do you need to solder, etc? I wouldn’t know where to begin

Totally DIY. But with the PCB’s that are available it doesn’t seem totally out of reach for someone with patience.

To those following that have built one - what branch of brewpi are you running? I have it integrated about 90% but on the legacy branch. Couple more pieces to work out to fully test.

I’m on the legacy branch of BrewPi too, once you’Ve got it sorted I’d been keen to hear what needs to be done

My test tube turned up yesterday from China, and the device fits…now i just need to print up a a sled to hold it all in place

It will be shared very son. My last two pieces showed up yesterday (Switches and the charging board) I finished assembling the first rough version and have data feeding to both my BrewPI installation (as a CVS) and the Ubidots site. On the BrewPi side I have the dummy data logging and graphing as desired. A couple small changes to make to make it pull the true iSpindel data, calibrate it up and run a test.

One thing I may still need to change - not sure if it is from the extra data points but on mobile devices the load time is horrendous. May just be mine, I have a beta OS on my phone and data connection is slow. On my laptop it is just a couple seconds…

Hoping to do the calibration later today, seal it up and toss it in the beer I am making tomorrow… May not go through the calibration but it would be fine for a test run of reception, logging and battery life…

I hope to have the changes as cut-and-paste as possible, replace original files with modified ones and tweak a few things…

Initial rough version is at https://github.com/gmasem/BrewPi-iSpindel

Currently logging, the dashed lines are from the iSpindel. Looks like I didn’t mix well after topping off, and my calibration may still be off because it is reading close to 1.0. Calibration was dead on earlier in the day but I had it apart just before tossing it in. (Or I have serious stratification going on. Will see when fermentation kicks off.

I also have it logging to Ubidots mainly for troubleshooting. Currently I have the iSpindel sending a reading every hour so it is easier to look on there to see if it’s logged than it is to watch the graph for a change.

So, after fermentation kicked off my SG reading went much more normal. And from there tapered down to 1.007, at which time bubbling stopped and it leveled out. A little bit of luck I will get the current batch out and into secondary and a new, better mixed (or full boil) batch in. If so, I will see how this FG compares as well as see how the OG of the next batch measures up. Hope to have time to run another batch before I have to start lagering this one - otherwise I have an under-bar cold storage cabinet to build soon

I also have a few parts coming in to build a second device to see if I can balance it better. Just some different headers mainly to make it all fit better. As well as have some spares.

Anyone try it yet? 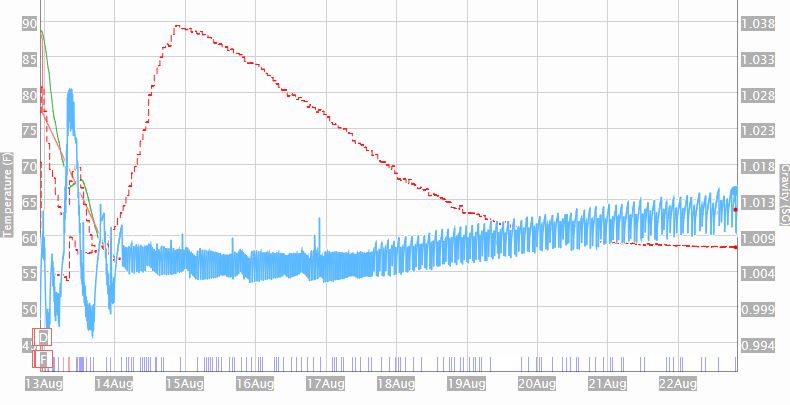 Out of interest, why is this a new github and not a fork that could be merged back into the original?

Not sure really. Put it up there to have somewhere to put it, and haven’t really dealt with github a whole lot. The brewometer integration was done as it’s own so I went the same way… If it was merged into the original I don’t know what else would need to change to function without the iSpindel data coming in, programming is not my thing at all so keeping my work from potentially impacting the rest seemed like a good idea.

Initially was just going to host a zip file on one of my servers but this way I had options to get some feedback as well.

If you would make this a fork of the original BrewPi repo, it will be much easier to pull in updates from us.

But we are also going to replace every repo that is currently part of BrewPi with something completely new. So it might not be worth your time. I’m focusing on the new code and don’t expect to make many changes to the current version.