Merchandiser build for my conical

I bought this old broken Beverage Air MT27 merchandiser for $200 on Craigslist. It was an R-12 unit but the compressor was shot. I’ve never brazed or done refrigeration but I know the basics so I thought it would be a fun project. I ended up putting in a new R-134A compressor, filter/dryer, suction side filter, and a cap tube. Charged it up and so far it’s working great. Has been holding 35°F for a few days. I spent about $450 total on the fridge and parts. I spent over $1200 on tools, Victor torch outfit, Yellow Jacket gauge, full tank of R134A,vacuum pump, micron gauge, and some other misc. stuff. Already used some of the stuff on my True 2-door kegerator and used some of the R-134A in my truck AC, so I think it will pay for itself over time. Beats paying someone $1000 to put in a new compressor.
Anyways, last night I started working on the brewpi. I found a nice compartment behind the light that will house my SSR. There’s power in there for the light, so I tapped into that to power the brewpi. Tonight I’ll wire the SSR and install the thermocouples. I’ll post some more pics when it’s up and running. My goal is to brew a Yuengling clone this weekend. 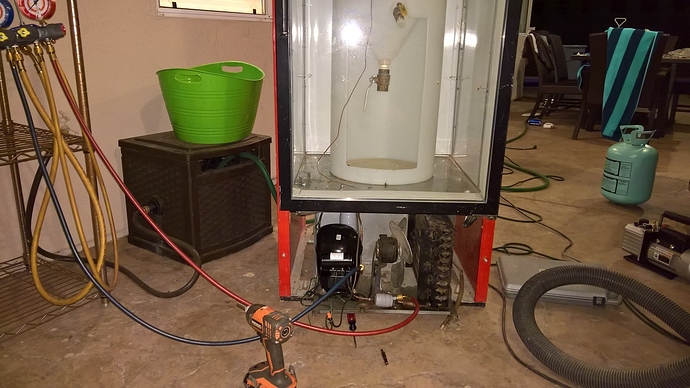 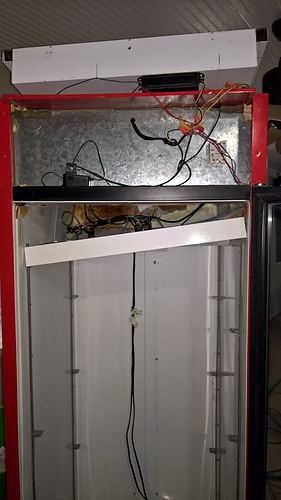 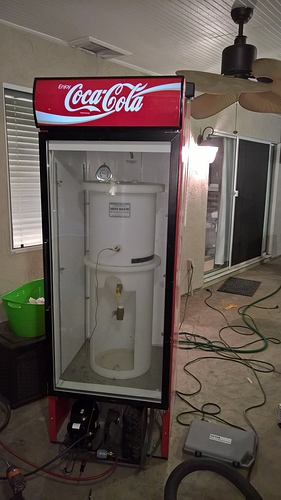 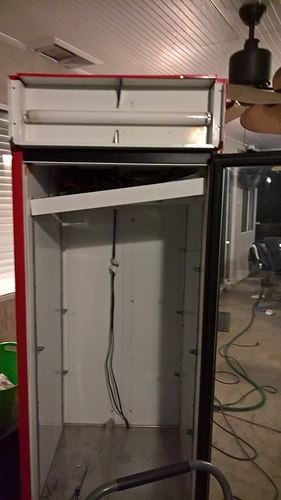 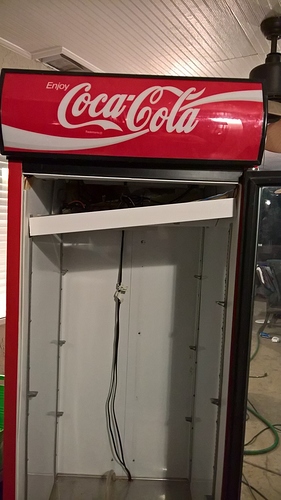 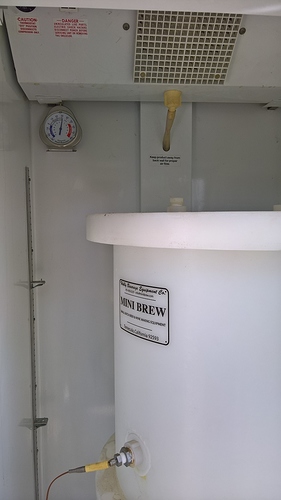 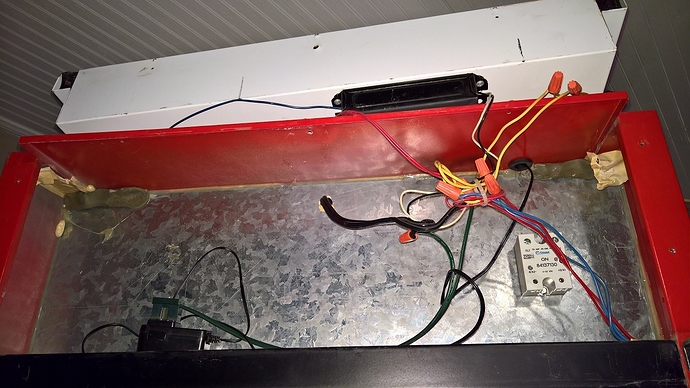 Well, this is good timing. I happened to pick up an MT-27 myself last week and plan to move my BrewPi from my old mini-fridge tonight. I like the idea of using the light power source for the BrewPi.

I’ll post pics when I have something worth seeing.

My other option for power was to use the neutral from the light and pull from the hot leg of the relay. That wouldn’t require any additional wires and would keep the Brewpi powered at all times. I may change it if I get tired of the light having to be on. Ill take some more pics of how I ran the wiring so you can have some ideas. I didn’t have to drill any holes into the refrigerated area. It came out pretty clean I thought.

I’m curious about what kind of compressor cycle times you’re seeing. I got the BrewPi hooked up to the MT-27, and mine seems to be cycling fairly frequently, about 5-6 times per hour, quickly going from cooling to waiting to cool and being governed by the preset minimums.

I’m surprised at how quickly the chamber loses temperature - as much as 10 degrees Fahrenheit in a few minutes. Granted it’s nearly empty now, and it would certainly help to fill it up a bit. Maybe I’ll need to keep bottles of water or something in there to help. Is yours similar?

I can post graphs this evening or this weekend if you’re curious.

Here’s what my graph looks like for the MT27. I have about 13 gallons of water in it, but it doesn’t seem to have made much difference. I’m not sure why it loses temperature so quickly… 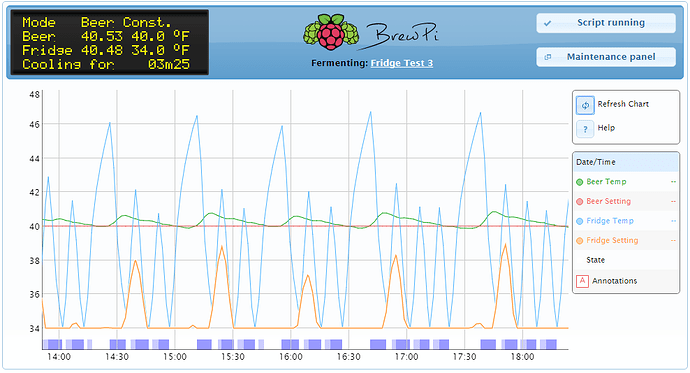 That seems to be a bit more of a temp rise than what I see. Check your door gasket and maybe use an infrared thermometer to check for air leaks or cold spots. Mine is out side at the moment but I may move it to the garage. I think the day time temperature variation may be too much. The beer temp rises by a couple degrees throughout the day and seems to be causing a vacuum in the fermenter. I have a lot of head space and the air lock goes in reverse after the sun goes down. I’m also wondering if my yeast are doing their thing but that’s another topic! I’ll post some screen shots of my chart later tonight.

This is with 5 gallons. I have default settings except I changed “Cooler minimum OFF time” to 480 seconds and min on time to 300 seconds. 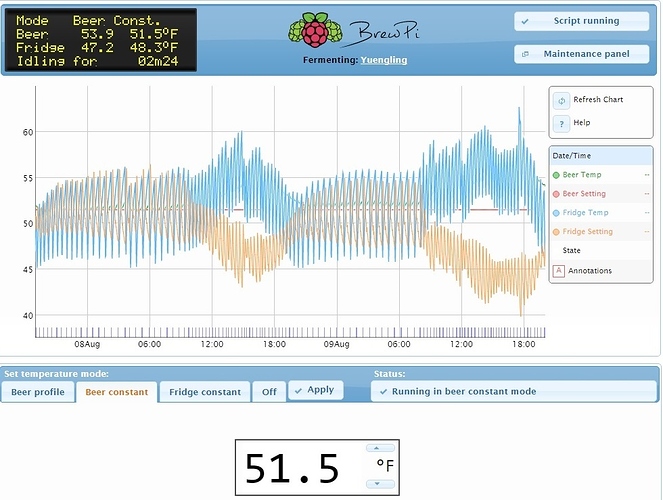 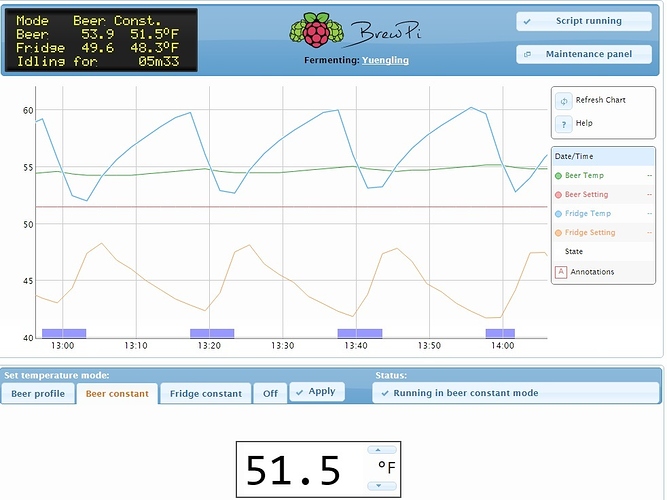 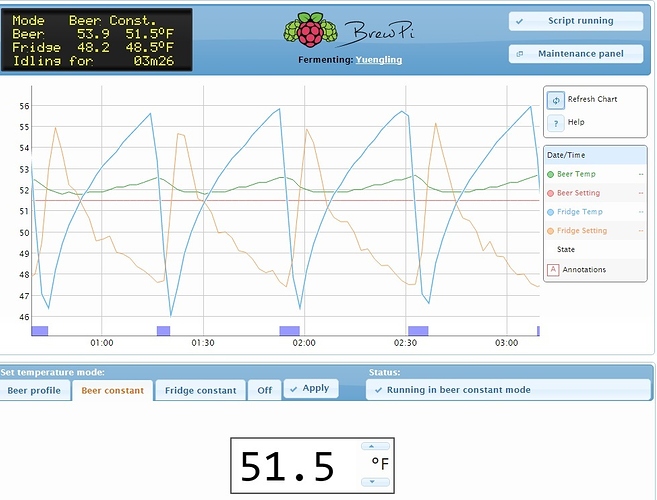 Thanks. In your last graph, it looks like it takes about 30 minutes for yours to raise 10 degrees, while mine goes 12 degrees in 15 minutes. Strange. My set point is lower, but the ambient temp in my room is about 70, which doens’t seem too bad.

I tried the infrared thermometer as you suggested but couldn’t find any cool spots around the seal.

Your set point is lower but my ambient temp is higher, roughly 85° in the day time. Therefore deltas seem similar. Not sure what else would cause the rapid temperature rise.
My evap fan does run continuously which is normal. The original thermostat does measure the evap temp but Im not sure what difference it would make for what we are controlling.

Where is your fridge thermocouple located? It’s not right in the airflow from the fan, along the back wall, is it? That may cause cold air to blow on it making it appear that the fridge was colder than it really was. That would shut down the compressor and allow the air temp inside the fridge to quickly equalize at a higher temp. Maybe try to increase your minimum run time to 540 seconds or so. That’s where mine is set.

Good catch, hopefully. My sensor was near the right hand wall, and I happened to notice that it was blowing around, so I moved it into the middle of the chamber earlier today. You thought of the same thing without even seeing it…

I also put my liquid probe in a larger, better insulated container (it was just in a one liter jar before). I should know by morning if these changes affect my cycle time.

Just to close the loop on this… moving the sensor to the middle of the chamber made a big difference. I don’t have the graph in front of me now to post, but with that change it reported a rise about 8 degrees in about 25 minutes, which is similar to your result. Thanks much for working with me to diagnose.