Hi, I’m building a BrewPi setup using a chest freezer and I would like your help making sure I didn’t miss anything in my design and parts list.

Here is a diagram for the build: 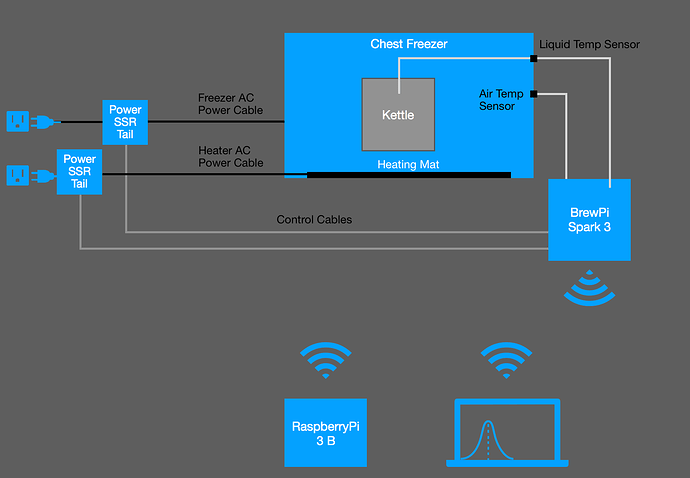 What should I use for the control cables between the BrewPi and the 2x PowerSSR Tail?
I’m also considering adding a fan to the setup. I would go for a computer fan, always on. Any suggestions on how to power it?

Thanks in advance for any tips or feedback!

I believe a space heater is preferred to a mat. BrewPi works best when it can use the air in the chamber as a thermal buffer. If the fermentor is sat on a mat, the fridge will be using the air as a thermal buffer but the mat will not. This can cause big swings when heating.

For connecting the BrewPi to the power tail, the link you posted states “#14-30 AWG wire”. If it’ll fit (I don’t know my wire gauges off the top of my head) then I use speaker wire. It has nice thick cores and will more than take the current for switching an SSR. And its cheap!

For a computer power fan, you can just use a regular barrel jack 12v power supply. Just be aware that cheaper ones has a tendency to make a very high pitch whistle. Most PC fans will come with a 3-pin fan to molex adaptor. I just chop the molex end off of this and solder on the relevant barrel connector.

Also, remember that you will likely have to disable the original temp control of the fridge. You’ll have to think about how you’ll go about that and if you’ll need anything for that such as terminal blocks or crimp connectors for re-arranging the wiring on the fridge.

Thanks for the feedback!

I found this reptile heater cable while browsing this forum. Does that look like a good alternative?

One question. If I put the mat on the wall of the freezer, and not directly in contact with the fermentation vessel, then it would radiate through the air instead of directly conducting through the liquid. Wouldn’t that result in the air being used as a thermal buffer, and work better? I like the mat because it’s tidier than a cable; I could attach it to the wall very easily.

disable the original temp control of the fridge

I am using a freezer. I was under the impression that one of the benefits of using a freezer is that less mods are required. My target temperature is around 25C (i’m fermenting kombucha). If the PowerSSR shuts the freezer off once the temp reduces to the target, how will the fridges thermostat / temp control interfere?

The thing I’d worry about with a heat mat is its designed to have something on it to pull heat away. I’d worry that without something to draw heat away, it would overheat and damage itself. I might be worrying too much there, though. I use tubular heaters like this http://www.ebay.co.uk/itm/Tubular-Tube-heater-low-energy-adjustable-thermostat-bathroom-greenhouse-garage/381922947081 . While bigger, they are made for the job, often have a good thermal cut out in (though not always!) and you can normally find somewhere to mount it that won’t get in the way like a corner or in front of the bump many uprights have for the compressor. The bracket also means if it breaks, it’s easy to just replace the tube isn’t permanently affixed to the bracket. Other options might also require things being glued to surfaces in some way. The glue might not like repeated heating/cooling. I think it’s worth planning for things to break. If a heater/cable/sensor breaks, will it be easy to replace it?

The cable might work but I have never seen it before so can’t form an opinion. Having a heating element in flex like that feels like its asking for an electric shock if the flex gets caught or perishes though. I’ve never seen it in the UK and imagine it wouldn’t pass safety standards over here.

That’s the sort of power jack I meant, yes.

You might be ok with a freezer. If it’s a simple analogue temp control, I imagine you could just set it to the coldest temp and use the setup you describe. A digital temp control might try to introduce a lag after turning on or something. I’m not sure. I guess you could just try turning your freezer on/off at the wall a few times and see if it behaves sensibly

One final thing that comes to mind. Be careful of your fridge temp probe position. Don’t mount it on/close to a heated/cooled surface. That’ll result in BrewPi seeing big temp swings and it’ll over-compensate.