I have been using a plate chiller since I started brewing, but to be honest, I don’t trust it. 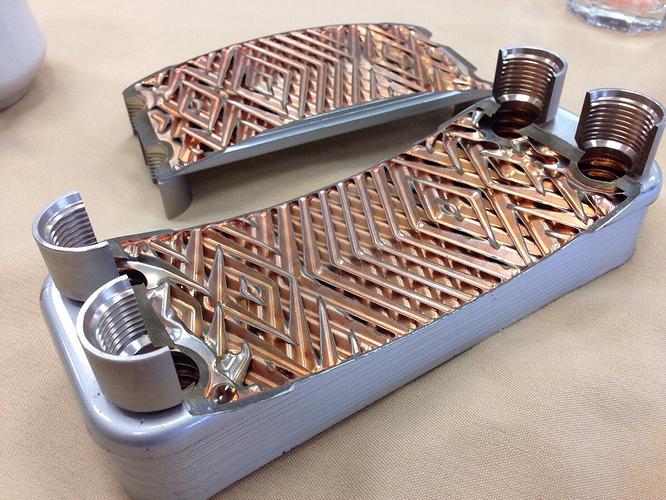 Too many little corners for nasty stuff to hide. The bigger professional plate chillers can be taken apart for cleaning and you can just boil the small ones, but still… I wanted a CFC that was as easy to keep clean as an immersion chiller, with the performance of a CFC.

So we came up with this setup: 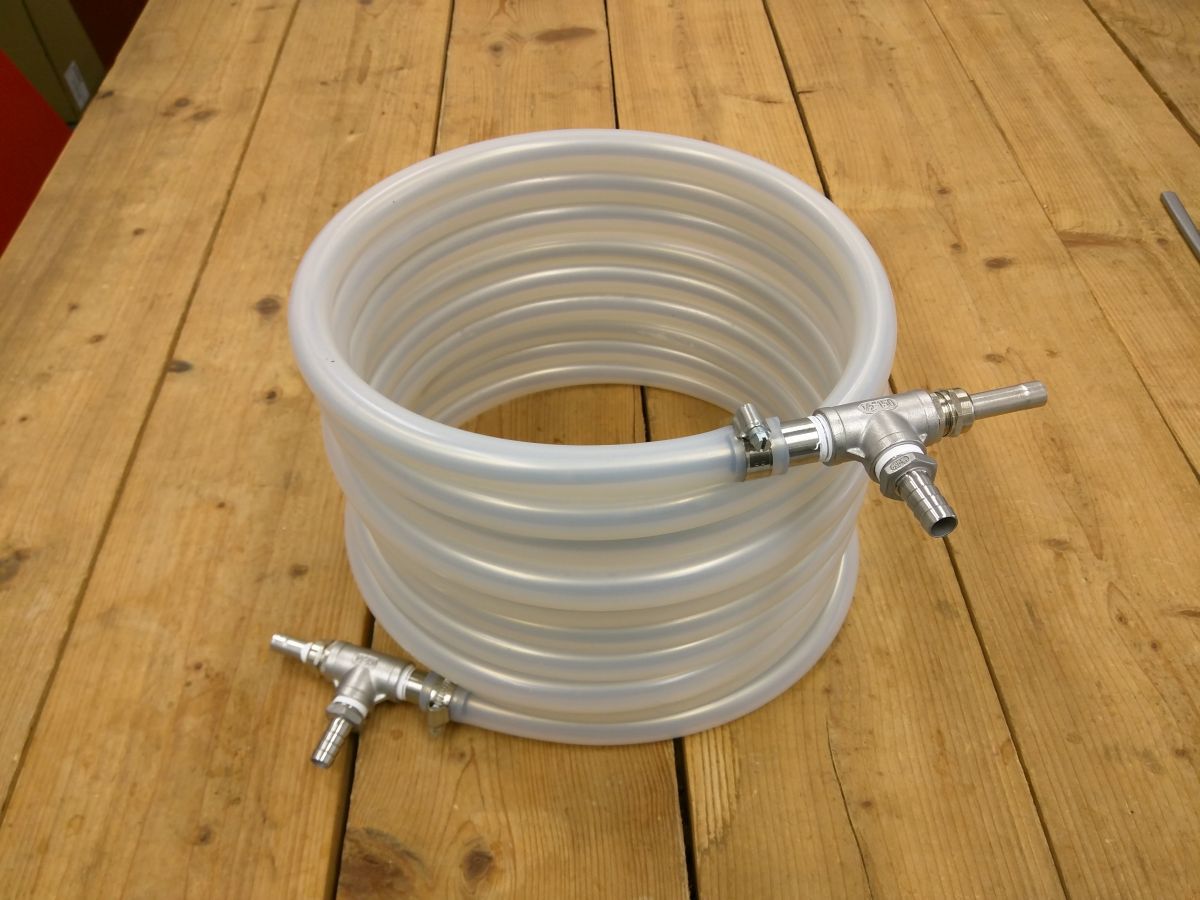 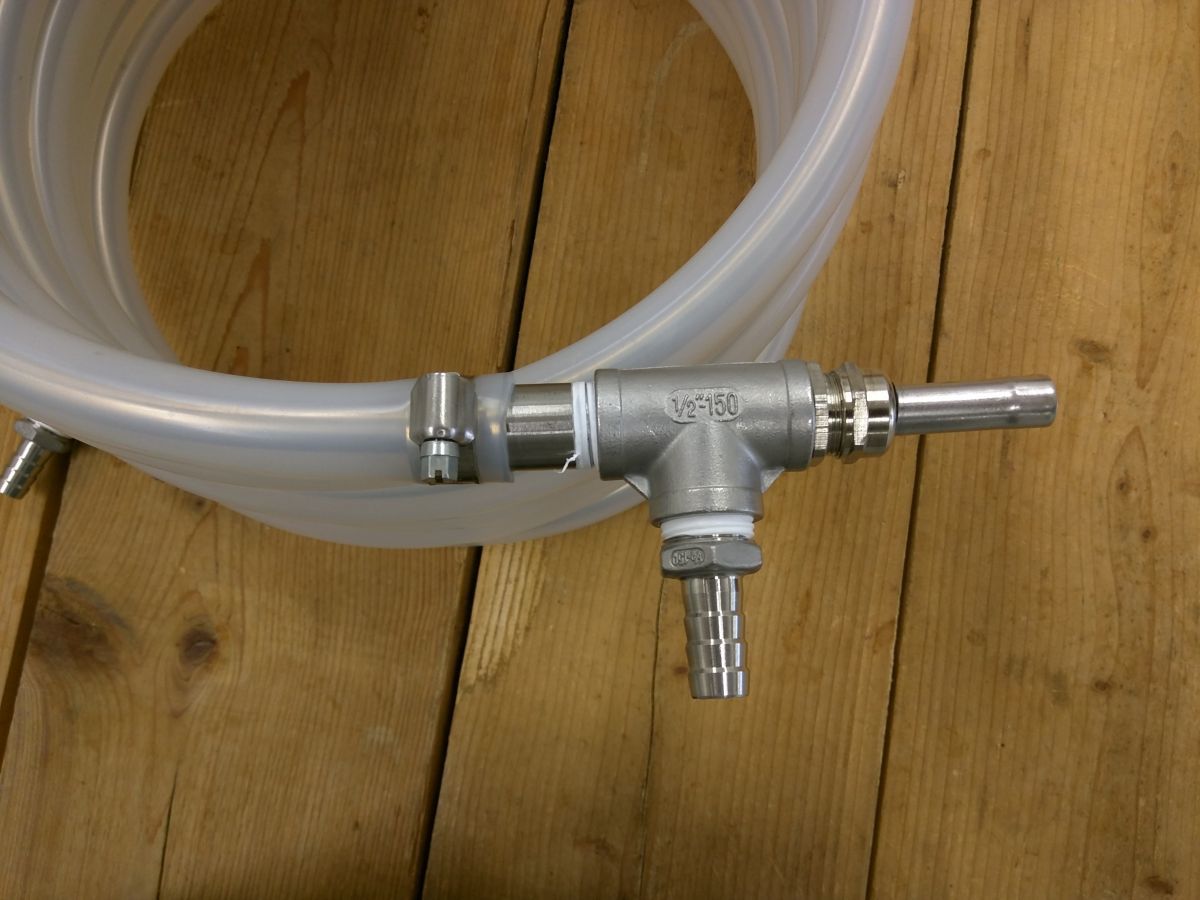 The tee has a 20mm hose barb for the silicone tube, with enough clearance so the water can flow around the stainless tube. To seal off the other end, we used a cable gland. With compression fittings, the tube cannot go through all the way. The SS tube as a ridge on the end to connect a silicone beer tube with a hose clamp. Optionally, we could also use a compression fitting and camlock at the end. 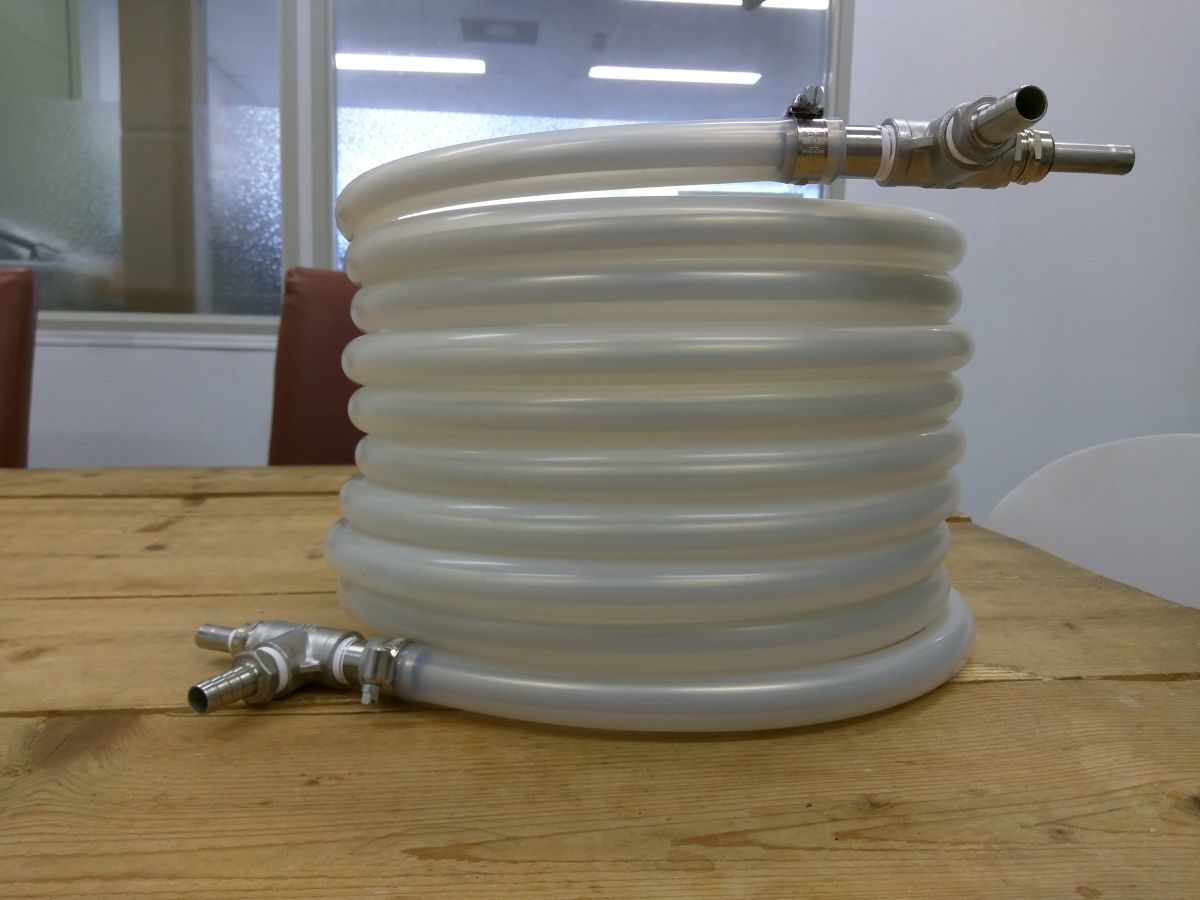 You will pump beer through the inner stainless tube and water through the outer silicone tube. Being made of stainless steel and silicone, it will be very durable and will withstand aggressive chemicals.

A 10 meter version will cost 139 euro.
We have not done performance tests yet. Maybe 5 meter will be enough, which of course will be cheaper.

Let me know what you guys think.

Usually they use copper for the inner tube because it offers better heat transfer properties. Stainless would be a bit easier to clean though.

I’ve seen some home made ones where they wrap the outside of the inner copper tube with thin copper wire in a spiral. This breaks up the laminar flow, causing some turbulence in the cold water flow, which improves the heat transfer further. The expensive ones use convoluted copper. 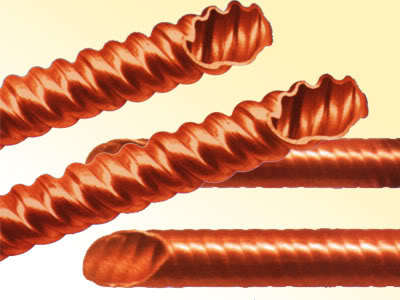 I opted for stainless instead of copper because of durability and chemical resistance. I think that’s more important than having a cooling time of 5 minutes instead of 10 minutes.

I hope that our tests show that we don’t need copper wire, because it will be much harder to build. It is hard enough to put 10 meter silicon tube around the coil. We used olive oil as lube and it is still tricky. Advice to make that easier is very welcome.

I used regular dish soap when building my 10m chiller, worked like a charm and easy to clean afterwards.

I have tried dish washing liquid before and it was a lot harder than with olive oil. Maybe I’ll try green soap next, combined with vibrating the coil.

Most builds I have seen people put the tube over the while it is straight and them bend it after. Not sure this would work with stainless though.

Another shop option would be to sell the connections for people making their own. It’s easier for you to make/prepare and you can still offer the competed option for people who want the finished solution.

Just to chime in and give my 2¢ I have both a counterflow like you have here and a plate chiller and I have to say hands down in a Pepsi® challenge the plate chiller is far far more effective (short plates aren’t as effective as a larger granted, mine is 18"/45.72cm long so LOTS of surface area). In a closed loop system I built to conserve water my counterflow took 12 minutes to go from boiling to pitching temps and the plate took under 5. I too had fears about cold side contamination, but with good cleaning practices you really have nothing to worry about. This really just means you can’t be a lazy brewer. As all of my professional brewer friends tell me it’s 90% cleaning 10% brewing.

I generally run a 30 minute clean cycle at beginning/end of my brewday. This consists of a hot brewers wash bath (recirculation) followed by a rise and acid wash to clean anything that is left (usually this is a longer cycle). I guess when I think about the chances of cold side contamination and really look at most homebrewers setup you have risk all over the place. Think the plate chiller is bad how about the plethora of threaded fittings most systems are riddled with. In the end anything is going to have risk even triclamp setups and the only true way to handle them is good housekeeping IMHO.

Thanks for the input Stephen, what are the specs of your counterflow chiller?

As all of my professional brewer friends tell me it’s 90% cleaning 10% brewing.

They also have this really good chart that shows cooling capacity for each model.

If you want some pics or anything let me know and I will send your way Elco.

Acutally, I was curious about the specs of your counterflow chiler.

Doh read that too fast, sorry.

My counter flow is copper housed in a rubber outer shell (goodyear garden hose). 50’ (15m) in length with a 3/8" (9.5mm) copper core that has copper wire soldered to it in a spiral pattern. The copper is .064"(1.6mm) thick, not a lot of options at the local hardware supply here that can keep costs down.

I used this guy for a good year and a half and while it did work it just took a lot longer. I was simply amazed out how fast the plate went from boil to pitching temps. In a test I did I was able to hit lager temps in 5 minutes, and that was a 13g(49l) of volume.

Ah, okay.
Our coil is 11mm ID and just 0.5mm wall thickness, which should be better. It is stainless though, which doesn’t conduct heat as well as copper. Looking forward to testing it.

Elco, I built a CFC, copper and clear plastic external. A turbulent wrap around wire does make a neglegable temperate drop difference, however covering the copper is near impossible, straight or curled. If you are going with stainless your heat transfer will be diminished compared to copper, however SS will be much better for longevity. That being the case you can mitigate the heat transfer variance buy adding length and increasing flow rate across the coil through the outer tube. Either a higher water pressure to increase flow rate. Or a larger diameter hose. Again this is also relative to your ground water temp. In the summer it can be as much as 30 degrees F higher here in Chicago.

Perhaps we can create a Glycol CFC with a stainless inner?

I would definitely be interrested in buying a stainless CFC.

CFC are awesome (I have one, built it myself)
Why did you use expensive silicon tube for the exterior? This makes no sense at all.
If you look at the thermal conductivity of materials (W/(m K)), copper has it at 400, while stainless steel is at 17.

Unless you plan to cool boling acid, there is absolutely no need to worry about chemical resistance.
BTW, “copper is bad” myth is concocted by idiot hipsters.

Very intestesting I could be tempted to buy the 10m one as I’m not too happy with plate chiller I have and some worries about getting it properly cleaned.

I have tried dish washing liquid before and it was a lot harder than with olive oil. Maybe I’ll try green soap next, combined with vibrating the coil.

Nuru gel has a reputation to be very slippery.

I have tested the CFC and these are the results for chilling 25L: 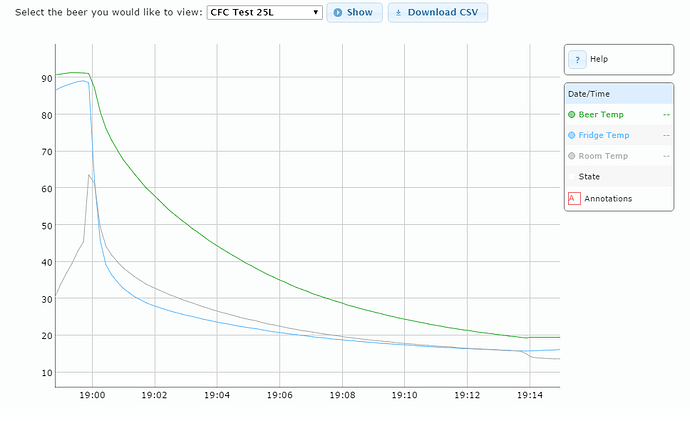 I must admit, I hoped for a quicker chill. I am going to make a prototype with copper tube as well.