*** I was able to resolve this issue by upgrading to Jessie and using the automatic installer. I suspect that I was mixing the older Wheezy system with the updated BrewPi files and there was some incompatibility issues.

So I’ve had a virtual box (old laptop) running Debian Wheezy and brewpi for a couple of years now. Worked wonderfully with no issues at all. Recently my laptop’s hard drive began to make some clicking noises so I decided to upgraded to another laptop. To keep things simple I installed Debian Wheezy just like my last system. I have installed a fresh copy of brewpi using the manual installation instructions. The web interface loads and I can see my arduino on the correct port - /dev/ttyACM0, however I am not able to get the script started. I attempted to reprogram the arduino with the Rev C Hex file (I’m using a true Uno board and not a generic version) but I get the following error message - specifically “no module named tools”.

Here is a screen shot. 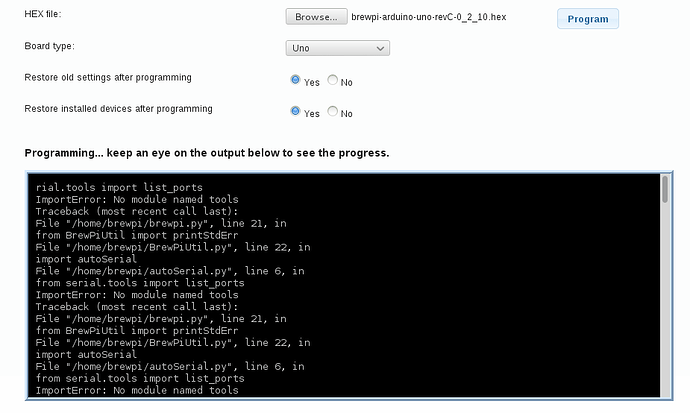 I have tried updating Python but it tells me that I already have the newest version. Python 2.7.3
I have tried running sudo apt-get install arduino-core but it tells me that I have the newest version
I have run the fixPermissions.sh command and it confirmed fixed permissions for /var/www and /home/brewpi
I have tried python updater.py --ask and chose the Legacy Branch
I also used Xloader and a winows PC to flash the arduino with the hex file thinking that the script currently running on the existing Arduino was causing some communication problems. Hex file was uploaded successfully but I get the same error message “no module named tools”.

Any other ideas that I could try?
Thanks