Slow or no responce from spark3

We wanted to setup a fermentation system and to make sure we got all your progress included we did a re-installation of the system and updated both bootloader and flash on the spark.

Now the spark-one service is connected and we can read the ports on it, but if we try to toggle the ports is stalls really long time. We have done one succesfull toggle from off to on but it took aprox. 2 minutes. In that time the GUI was showing the ‘await’ icon on the on/off button as to indicate it was executing command. So that part worked nicely. It was indicating current state, when i press “set pin high” it started indicating the ‘await’ circle and after 2 minutes it shown pin was high, which was also the fact, since the pin had changed as requested. Only issue was the 2 minutes delay.

Now system is really struggling. We have tried booting both the PC running Linux mint and the brewblox installation as well as the spark3.

After reboot, the both report in nicely and the current state is reported. Issues begin when we want to change pin settings.

I have extracted a log and hope that anyone here has an idea of the problems we are facing. 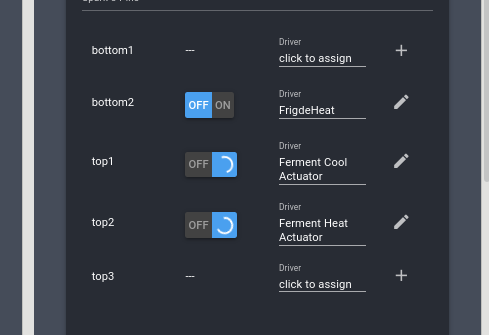 keeps hanging when we try to turn outputs on/off. works periodic, but then again isnt working for several min. so there must be a communication issue.

The symptoms sound like you’re trying to toggle a digital actuator with a minOff or a mutex constraint.

The blocks in your log are inconclusive on this: there are actuators with and without constriants / drivers. Do all actuators show this behaviour, or just a few?

I’m also seeing some DeprecatedObject blocks. Depending on the age of your setup, it may help to export and then import your blocks (service page, actions button in top right, “Import/Export Blocks”).
This may solve issues caused by the binary data on the constroller being subtly different from what the firmware expects.

Damn… that’s fast and precise response on a sunday evening… !

Thanks, that was it