I just threw together a Arduino based BrewPi from parts I had laying around. I tried it once before, several months ago, and for whatever reason, it was an epic failure then. This time I goto it working an it is properly reading three DS18b20 sensors and has a SSR-40DA Solid State Relay attached to it. I’ll probably re-wire either my fermentation chamber or the freezer that I’ve re-purposed for cold crashing with this BrewPi for my next batch.

My question is with SSR’s vs EMR’s. What has the overall experience with them been? I like the idea of the SSRs, and I see them for sale in the shop, but I’ve also read some horror stories with them failing quite badly - at least one case (that I’ve read) where if the person hadn’t been there, their house would likely have ashes. I can’t say that’ve ever heard of really bad mechanical Relay failures. They generally work or they don’t, but they generally don’t burn your house down when they fail.

I like the idea of the SSRs - very simple from a wiring perspective - four terminals, two for activating it and two for the load. With a relay board, it’s not super complex, but it’s not quite as clean and simple as the SSRs.

Does anyone have any thoughts? is there any way to protect against a bad SSR failure burning your house down?

i would recommend reading up on the fake SSR’s stories…
especially with the 3d printing craze the need for SSR’s have skyrocketed. they are in theory safer than a EMR since there are no moving parts and also no risk of the relay “fusing” with one of the sides when high voltages and or amperages are in use.

the bad news is that there are a lot of fake SSR’s out there…
http://community.robo3d.com/index.php?threads/heated-bed-fake-fotek-solid-state-relays-ssr.3880/
look at the thread above where someone bought a fake and it was so hot that it melted the plastic within 30 seconds under a 25 percent load… even the canadian customs left a note about it:
http://canada.ul.com/safetyalerts/ul-warns-of-solid-state-relay-with-counterfeit-ul-recognition-mark-release-13pn-52/

so as long as you buy genuine, the SSR’s should be safer than EMR’s…

I would stay away from Fotek, regardless of fake/real.

And SSRs do require a heat sink. For a fridge or a 100W heater, when you are only using 1A, you can leave it out. But anything bigger requires one.

What’s wrong with Fotec if they’re real? supposedly it’s actually a good brand, provided you don’t get a fake. Of course the one I have is a Fotek lol. Korneel, thanks for the links - I actually can’t tell if mine is a fake or not. The label is almost identical to the real one, the only difference being it says ‘Made in Taiwan’ rather than ‘Taiwan Made’, and this one does not have the beveled lower right corner. Dont’ know if they made a design change or if this is fake. I didn’t get it from Amazon or fleabay though - I got it from a local electronics shop that I know wouldn’t knowingly sell fake ones - if it’s fake, I’m pretty sure they are unaware.

Opinions? The label is REAL close to the legit one, but the ‘Made in Taiwan’ wording differences and four square corners make me suspect it’s a fake. 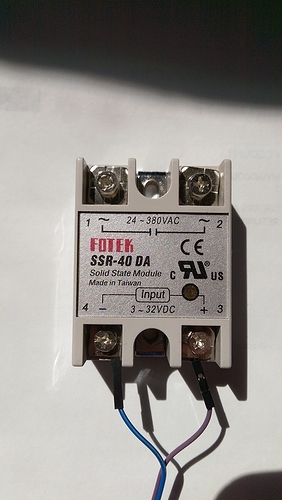 SSR are required for doing PWM with a quick cycle time, but for things like pumps and compressors you don’t want to cycle them quickly so you’d think mechanical relays would be a good choice. For me the deciding factor was that most of the SSR’s have a lower current requirement at a given voltage. Using a mechanical relay would have most likely required additional circuitry to support the current draw. Plus… SSR’s are really about the same cost and if I choose to repurpose them for something that would benefit PWM (e.g a heater) I can. IMHO, the heatsinks are the only downside. Mechanical relays are much more compact.