Temp sensors went crazy for a minute today. Or a new set of laws of physics took over in my ferm chamber!

Yeah, those parallel universes have a habit of colliding just when you least expect it!

Thanks for reporting - is indeed strange and I don’t have an explanation other than perhaps a corrupted reading. (Although onewire is CRC checked, it’s 8-bit so a 1 in 256 chance that data corruption goes unnoticed.)

Hi have seen this as well. What about implementing a function to diregard readings if it is ±X degrees from the last one?

Also if you restart the spark all measurements starts at about 80 degrees (cannot remember the exact) C. After a while it stabilizes at its correct temp. It makes for big abnomalies in the graphs and it makes the algorithm behave erratic.

I’m doing my first beer with the brewpi and I’m seeing the same thing.

When I’m checking the log files, it appears that the sensors are disconnecting.

The disconnected sensors is indeed a bug we need to look at, but do you have a 1000W heater in your fridge or something? from the graph, it looks like you have a much too powerful heater.

Hi have seen this as well. What about implementing a function to diregard readings if it is ±X degrees from the last one?

The sensors are filtered with a very low pass filter, so I’m surprised the peaks come through, unless the sensor is reporting a high value for a long period of time. Can someone zoom in and see the detail on the peak?

I hadn’t actually zoomed in. Looks Like mine was a case of some bad recording as there are some gaps and the upper point is back in time?

My goodness…it goes back in time! my joke about parallel universes might not have been so far off after all!

That is very strange. Looks like you gained an hour - is DST active in your area?

Too powerful? lol Of course I’m using a 1000W ceramic heater because 'Merica! I call it the freedom heater. But seriously, I just put back on the heat belt which will help. I didn’t have any issues using the other heater in my chest freezer though (using an STC-1000).

Were you traveling at 88 MPH at the time?

I’m in Chicago. DST started on March 8th. So shouldn’t of done anything now.

Hi guys, same weird spike here. HOWEVER, I know what caused it in my case, so you may want to review your logs.

Mine looks identical to yours, but was definitely from the Pi/Spark loosing power. I went in to get a beer from the fridge next to it and bumped the cable, which caused the Pi/Spark to lose power momentarily (my micro-usb is not snug in the Pi for some reason).

The resulting spike was some sort of out-of-bounds reading that happened during this power loss, and then it slowly recovered afterwards.

If you’re seeing this I suggest checking the logs to see if your Pi is rebooting or loosing power for some reason as one possible explanation. I’m thinking the BrewPi needs some small adjustments for power loss during operation?

I’m getting something very similar, happened when I was switching from Beer Constant to Profile(profile was not dropping temps fast enough to the lagering temp I needed). I did note all sorts of spikes and sensor weirdness when I was running preliminary tests after I had just assembled it including both sensors stuck at 85. I ran my AC and temp sensors through ferrites and grounded the box I put it all it, that did the trick there. I don’t particularly care but it skews my graph, anybody have any success in editing the json files? I tried editing them but that didn’t change the graph. 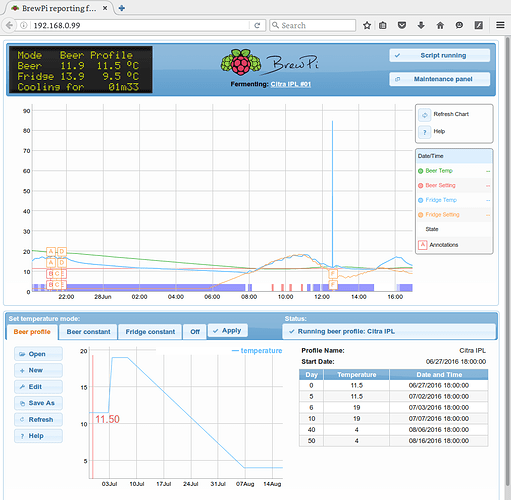 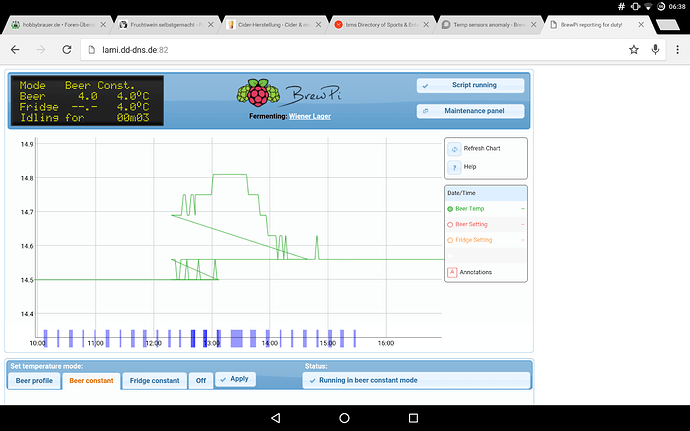 Mine can go in the past too

Happend during a reboot since the powr went down. Doesn’t bother me really…

That’s the time on the Raspberry Pi changing.

@Kitehopper: you can edit the files in /var/www/data
Do you have a BrewPi Spark and are you using SSRs?

A knockoff Uno with mechanical switches. Since I posted my itchy fingers got to tinkering and it seems I have sourced the issue. My wifi adapter(tragically old model) is drawing too much current, don’t know exact but total USB draw was reaching the RPi’s USB output current limit(600mA). This explained other small issues I had like the Arduino(~80mA) resetting when switching the relays(~100mA) or communicating, spurious temperture data and random inability to contact the RPI over wifi, especially after a reboot. Solution was to run 5V directly from my 2A power supply to the wifi and to order a new wifi adapter. Since I did that the BrewPi has been stable as a rock.