I’m seeing what I think is pretty profound temperature stratification inside my stainless steel conical fermentor. I have a 10 gallon Spike Brewing unitank, with a heat wrap on the cone and chilled glycol in a coil that comes down from the top cap. I’ve taken a temp measurement from every sample of the beer I’ve taken (the sample port is lower down on the body than the temp port) and all the samples I’ve taken have been far off what my brewpi is telling me the temp is, by 3-4 degress F, low if the external temp was fairly cold (makes sense, the cold walls) and now high, because I’m doing a diacetyl rest at about 6 deg above fermentation temp.

Has anyone seen anything similar? In my previous job I actually designed a large thermal storage system using an alcohol + water thermal storage fluid, and the stratification I saw was remarkable, 10-12F difference in temps at different levels in the tank, but I was testing for it, I had temp probes spaced every 2 feet, so I designed around this property and made it work to our advantage. I can’t do that here. I’m trying to think of what to do, I suppose i could suspend a bunch of probes in the fluid so I can get a better idea of what’s going on, but that will be fairly expensive.

I think the effect will be less dramatic during active fermentation, because this keeps the beer in motion.

We can add support to use the average of multiple sensors as input for the PID.
It would be better though to minimize the temperature difference in the tank.

Is your tank isolated? An isolating jacket will probably help. The location of the heater (bottom) and the cooler (top) is already optimal I think, because hotter fluid will rise.

My tank has the neoprene jacket that Spike Brewing sells, but I am suspicious that the heating and cooling system design on these tanks may encourage stratification instead of having all the walls be the same chilled temp, like if this was in a fridge, or if it was glycol jacketed. White does say in “Yeast” that yeast are excellent insulators, and there can be a 10-15F temp differential between the walls and the center of the yeast in the cone, or in the fluid and the yeast in the cone, and that’s talking about a large, glycol jacketed conical fermentor. I suspect having the chiller above and hoping there will be convection currents overcoming stratification may not be ideal.

Has anyone with this system noticed their beer quality degrade? I don’t have anything to compare this too as I bought this system basically when I started brewing.

From a BrewPi perspective, I think I’d want to do something to eliminate the stratification (small pump maybe?) before I coded some kind of averaging for multiple sensors. I’m not familiar enough with yeast and fermentation to say definitively that during non-active fermentation, having stratification layers inside the tank will actually effect the beer… I mean, could one layer of temp create off flavors and then one layer clean up those compounds later?

Maybe this isn’t an issue, maybe I can still make great beer by setting the sensor to (X) and having it work, but the engineer in me wants to know what the temp of the fluid, or the temp of all the layers and how large the layers are. I’ll probably drop a couple probes at different depths in the next batch I do and just log them, so that should help inform if I need to worry about this or not.

From our experience here, with glycol-jacketed fermenters:

So, clearly: insulate as much as you can (I really recommend Armaflex products). If you can’t, use some CO2 to mix your beer while crashing (it will have the negative effect of limiting your cold crash efficiency tho), but it’s better than frozen beer!

Hope this brings some useful input,

I use the SSBrewTech Conical Fermenter with the FTS system (neoprene jacket, submerged coil and heating pad) except I use BrewPi to control the Heating pad and the glycol pump. My brews have been consistent in taste. The submerged coil does take longer to manually clean but with CIPS, it’s a breeze and I put some sealed quick disconnects on the glycol lines so I can move the fermenter. This setup has been treating me well for over a year of brewing every other weekend with just 2 ferementers.

I got the same issue, but a bit more interesting. I am doing a testrun with just water in my 1/2 bbl chronical ss brewtech. Now it just wont reach the setpoint I set, 3 degrees. I just checked the sensor, wich is in the default thermowell, with another sensor and they both have the same reading. So I did a check with a hand thermomenter and it turns out that water in the top of the fermenter is 1,5 degree and the water around the thermowell is 4,5 degree. This is the world upside down because I thought that hot liquid rizes…
Because of the low temperature I put some extra blankets around the fermentor, the bottom part has just the neoprene jacket from ss brewtech and no extra blankets. But I cannot imagine that this is the cause of the temperature difference.

The glycol is entering the cooling coil at the top inlet and comes out at the bottom.

Does somebody have a simular experience?

I put some extra insulation between the neoprene and the stainless on mine. The neoprene jacket is pretty bad. But still you’ll struggle to get to 2 degrees for the beer when it’s hot outside.

Oh and I just thought of another thing. Water has the highest density around 4 degrees! Ice is lighter than water. 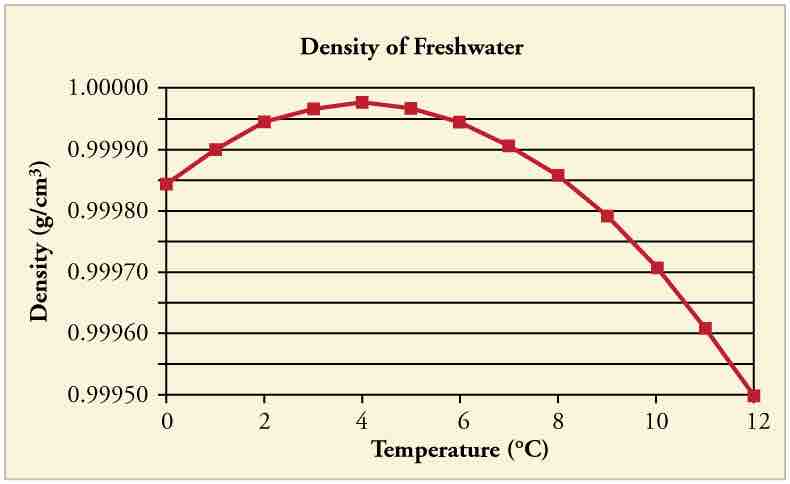 To come back at the graph of the fresh water density I did a testrun with water and 3 sensors. bottom, middle and top. Attatched a graph of the temperatures while cooling to a setpoint of 4 degrees.
This shows exactly what is stated in the graph. Around the 4 degrees the temperatre flips from ‘top warm/bottom cold’ to ‘top cold/bottom warm’.