I have now got my BrewPi Spark up and running and I am running a Test Beer Profile. Everything appeared ok to start with, but it has been now idle for nearly 13 hours rather than heating? Please see screen shot; 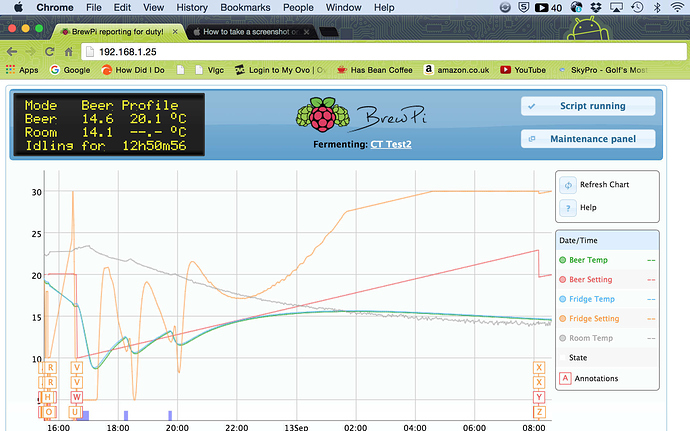 In my pre-testing the heating and cooling appeared to work ok? I am sure that I have made a silly mistake, but I am not sure were I have gone wrong?

Thanks for your help?

Could it be that the fridge probe has dropped out? It’s showing beer and room in the display

Hi, Thanks for highlighting this, but just checked the sensors and they are still working (increased temp when held).

Hi. I think I have solved my problem?? For some reason in “Maintenance Panel - Devices” I am using 3 sensors, Fridge, Beer and Room and 2 SSR switches, Heat and Cool.

My initial setting I had the Sensors on Device 0, 1 & 2 and SSR on 3 & 4. For some the reason when I changed the heating SSR device to 5 it worked?

So I have started the test again and will monitor to see how it is going?

Hmm, no idea why the actuator was not seen as installed. For a better test, put your beer sensor in a bucket of water, instead of in the air.