Does the “THREADED ONEWIRE TEMPERATURE SENSOR” fit in the weldless coupling for the SSBrewTech kettles?

The NPT model should with no problem.

Only problem is the probe length. I wish they were at least 2.5" long. Have same issue with them with my tri-clamp adapters. Probe doesn’t even get past fitting.

They are designed to be used in a tee, so you measure the temperature of the beer coming from the filter. That way, you’ll measure an aggregate of your entire mash, instead of a single point. With a thick mash, the temperature is not always uniform.

Using a rims tube with tri-clover to npt fitting in the end. Would not be recirculating the boil kettle, planning ahead here.

I would agree that it would be really nice to have a longer threaded temperature probe. My setup is single pot BIAB. Obviously I’m not recirculating during boil but still want to be ale to measure temperature at this time. I’ve ended up buying a longer thermocouple and I will make my own probe up.

@Elco would you consider selling the connector and cable for your threaded sensors separately (or sharing part numbers)?

I have been looking into thermowells, but what I found so far ended up not being cost effective. I will give it another look.

what about just a longer version of the threaded sensor (or is that what you mean)?

That’s what I mean. The thing that makes it expensive is to have to drill very deep with a drill of only 6mm. The current probe is CNC’d from one piece. For a much longer thermowell, the deep drill get’s expensive. Therefore they are usually made by welding a tube to a fitting.

Not sure if this would work with regular sensor 304 Stainless steel Designed to instal into 17mm holes 6.5 mm inner diameter 100 mm length (into the vessel) Standard in Chronical fermenters and Brewmaster Edition Brew Buckets. Compatible, but does not include, LCD Thermometer.

I designed a longer version with a 60 mm probe that can be easily mounted in a kettle or fermenter wall. I hope the prototype is ready next week.

You can put me down for at least two of these.

I use the lcd thermowell on my ss brewtech fermenter and it works with the waterproof one wire temp sensors you get on eBay. I just had to remove the heat shrink to fit in the well diameter. Not a big deal since the wire is potted in the metal probe. I have one of Elco’s one wire sensors I could test fit in the well if anyone is interested.

I have a 1-bbl stainless fermenter designed to fit inside my upright freezer (Stout Tanks & Kettles). It has a tri-clamp compatible temperature port and I would gladly replace the included thermowell with the tri-clamp compatible OneWire sensor sold on the BrewPi store. But like others on this thread the 2.4" probe length is a concern for me. The BrewPi probe would clear the wall of the fermenter by only about 1.4", and I am concerned that a reading so close to the wall would not be representative. Is there a recommendation for how far into a fermenter that a temp probe should sit? The ambient temp on the outside of the fermenter wall is not room temp; it is (ideally) whatever the BrewPi deems the fridge setting should be at that time.

To be honest, I don’t know. The triclamp sensor has a very thin wall near the top, which should prevent the influence of the wall temperature through the steel. But I don’t know about the temperature gradient in the liquid in your fermenter.

Would you like to test it for me?
Get the triclamp sensor and do a test with water. Also hang one of our simple OneWire sensors in the middle of the fermenter and log some data. If the difference is too big, I’ll refund the triclamp sensor.

OK, I will be your guinea pig (not sure if that idiom means the same in NL). I am already test-controlling a fermenter full of water, so I will just need to drain it far enough to expose the thermowell to air, replace the existing traditional OneWire sensor with the tri-clamp one, and fill back up again. I will plug in the existing probe where the Room sensor currently is plugged, and route it through the lid port of the fermenter, hopefully deep enough that it’s sitting a foot or more under the liquid level and as close to the center of the cylindrical cross-section as possible.

I finally got the Tri-clamp sensor installed in the side of the fermenter and a simple / regular OneWire sensor dropped down into the center of the beer from the top. From what I can tell the OneWire sensor is sitting close to the same height as the Tri-clamp.

I’m cooling water at the moment, and the thing is filled pretty much to the brim (i.e. more full than it would be in a normal fermentation). Not surprisingly the OneWire has more ‘thermal inertia’ than the Tri-clamp sensor does, presumably because the OneWire is surrounded by at least 9" of water in any direction whereas the Tri-clamp is effectively at the wall of the fermenter. Note: in the BrewPi screenshot the Tri-clamp is represented by the green Beer Temp plot and the OneWire is the gray Room Temp plot.

I started with just a 1-degree cooling test. Once that’s done I will go for maybe some heat and then a 10-degree crash. I have a spreadsheet for BrewPi fermentations where I track % temp error & such, so I will be able to analyze things like severity of cold crash vs. how it affects the OneWire / Tri-clamp difference. In other words, more to follow. If any comments or suggestions please let me know. I can also post my current PID settings if that’s helpful. 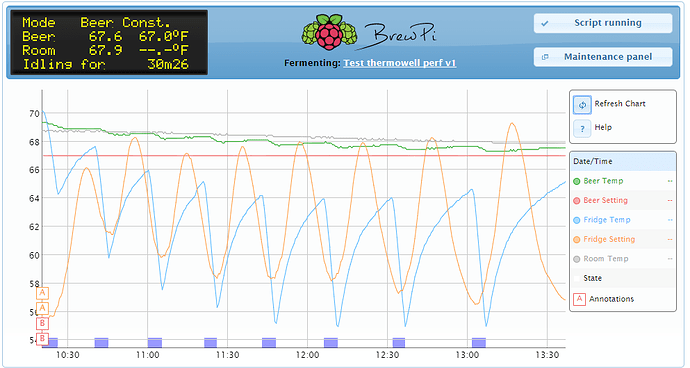 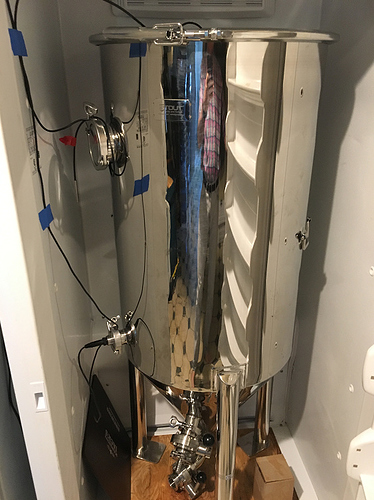 I have finished going through 3 heating steps:

In all cases the Tri-Clamp sensor was clearly separated from the OneWire sensor submerged deep inside the beer. I’ve provided the attached Excel plot. Green = Tri-Clamp temp, blue = OneWire temp, red = Beer Setting, and the gray plot on the secondary axis shows the % diff between Tri-Clamp and OneWire. Also there is a screenshot from my phone at bottom.

My conclusion, at least as relates to heating, is that the sensor deep in the beer is slower to react to the start of a temp ramp, but then follows the Tri-Clamp pretty consistently. There was never a point where the two sensors were in effective agreement although if I had waited long enough this would eventually happened. Makes me wish I had a big version of a magnetic stir rod mixing up the liquid inside my fermenter. During an active fermentation there will of course be fluid movement due to the yeast activity; for now I just have a static vessel full of water.

I am now logging a few ramps of cooling to see whether the behavior is any different going in the more common (for brewers) negative direction. 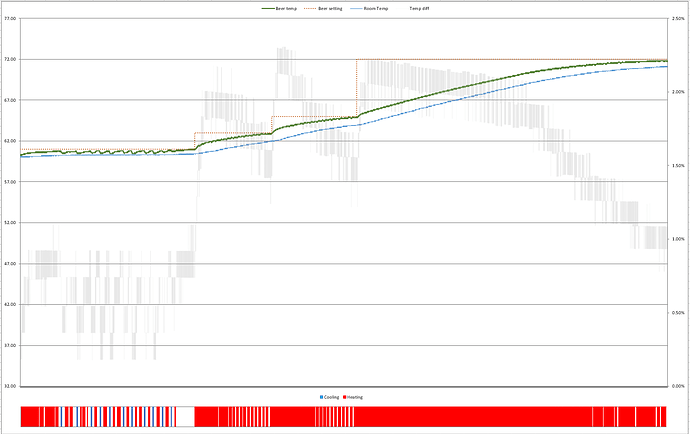 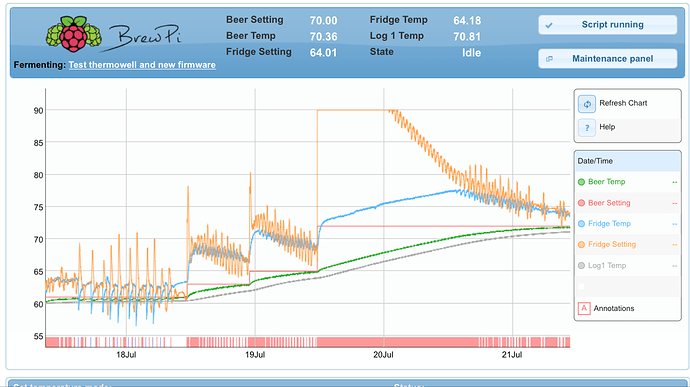 Interesting results! The sensors seem pretty close when in steady state, but during a ramp it seems that the outside ahead, which is expected.

Unfortunately, I cannot really make the probes longer, at least not with the way they are currently produced. They actually CNC then out of one piece and drill the hole. The deep hole with a thin wall is difficult enough as it is already.

Here is a plot of three cooling ramps, including a cold crash down to 35F. It’s interesting to note that when the set point was reached for the middle ramp (70F to 66F) the OneWire sensor was 0.43F behind the Tri-clamp, but it was another 5 hours before the OneWire achieved that last half-degree of cooling! On the smaller ramp from 72 to 70F this time difference was 3.5 hours.

By comparison, on the big crash the two sensors effectively got to 35F at the same time. I think this is because the ambient room temp is about 70F and whenever the compressor turned off (which became frequent toward the end) the Tri-clamp sensor started climbing pretty fast whereas the OneWire was insulated against such swings.

I am now logging a free rise from 35F to room temp, and maybe after that will do a true beer profile. But there is a brew day coming up and experimentation time will be over! 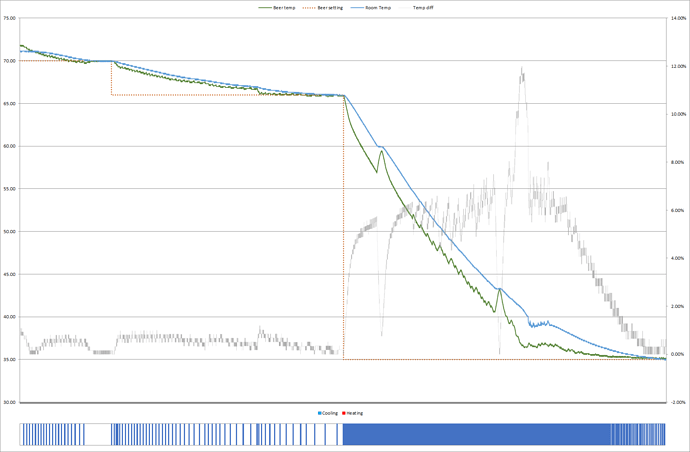