Hopefully somebody knows a way for me to fix my issue easily. I have had my BrewPi running for approximately 1 year. Just recently the freezer stopped turning on. I first thought the problem was with the freezer, but the freezer turns on as soon as plugged directly into the wall. I am using a Sainsmart 2 Channel relay to control the heating and cooling, but it does not appear that enough electricity is getting to the freezer to get the compressor to start. Does this make sense? I don’t understand why this just began after 9 months of no issues. Can I fix the problem using the same set up, or do I have to wire in a SSR to solve this? Any ideas would be greatly appreciated. This is the wiring setup I am using as my switch. 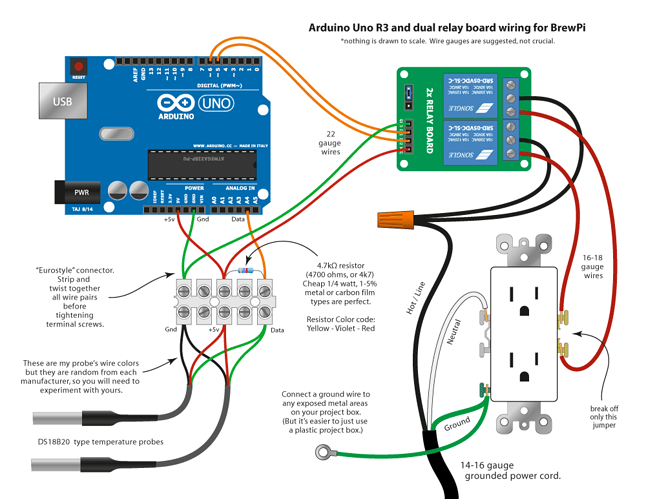 Just measure and you’ll know where the problem is.

If this is only affecting the cooling, why not switch the outputs on the relays over (cooling becomes heating and heating becomes cooling). That would prove that the issue is with the relay on what was the cooling.

It is more than likely down to contact erosion.

if it is the relay I would opt for the SSR as no moving parts.

I’m going to test the switch using a multimeter like you have suggested. Is there a way to set my BrewPi to automatically close the heat / cooling relay so I don’t have to wait the 8 minutes each time I set the BrewPi to heat / cool?

While the BrewPi was in “heating” mode I moved the freezer plug to that socket and still didn’t get the freezer to turn on. That was what led me to wonder why things would change. I am getting the power to run the ceramic heat bulb and the fan in the freezer, but it won’t turn on the freezer (not even the light). My wiring skills don’t go as far as doing most of my own trouble shooting. I can read a wiring diagram, and reproduce what I am given but when one of those parts goes bad I have a hard time figuring out the exact piece.

@Spumilupi… Have you resolved this issue?
I’m running the exact setup, down to the way you tied in the sensors.
First few things that comes to mind that have not been covered, did you bypass the thermostat on the freezer? Is it possible that the temp knob on the freezer got bumped?

Everything does seem to be working perfectly again. I’m not sure what exactly had gone wrong with it. I completely dismantled the Arduino set up, and retired everything. I had been using 14 g wire in the relay which I switched to 16 g and it seems to fit better. Once I plugged everything back together it all seems to work just as before.

Hello!
I feel like kind of a “monkey” in this matter, I don’t understand nothing about programming, neither electric components.
I recently bought a bunch of gear from a home brewer and one of it is an Arduino Uno with some other stuff inside the box. He told me (can’t guarantee it) that it was a working arduino. I plugged him and it was lighting red lights.
I really wanted to program brewpi with the Arduino, but I’ve been researching for the past 3 days and I don’t even know where to start! Can anyone help me?