Hi,
I’ve recently got an SS brewTech brewmaster conical and i’m pumping water from the ice bank in my beer chiller through the built in cooling coil to cool it and have a heat belt for heating

I’m using an Arduino based controller, the main problem i have is over shoot on cooling, i’ve modified the firmware to reduce “MIN_COOL_ON_TIME” down to 5 seconds which helped a lot, but I’m still getting swings between cooling and heating. 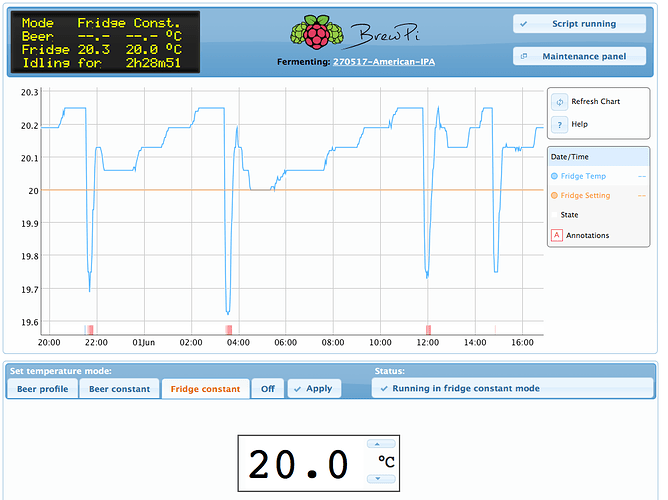 I know the swings are only 0.5C but can I improve upon this or is it the best that can be expected?

Also is there anyway I can implement beer profile mode with this hardware? would adding a second temp sensor in the fermenters thermowell work?

The arduino version is not very suitable for direct cooling. With the new algorithm on the Spark, you have PWM control and you can cool and heat much more gently, by running the heating and cooling on less than full power. The Arduino version doesn’t have this.

You could reduce your idle range, but I cannot help you much further with the Arduino version.

Thanks Elco
I guess it’s time to bite the bullet and upgrade then, although I’m not sure how PWM will help controlling a pump, unless that will allow it to run for a few seconds at a time rather than in whole 1 minute intervals.

If I use the 1 wire to i2c chip will the current firmware work on a generic photon chip or does it need a display attached, the reason I ask is mainly cost but also easy of replacing the existing Arduino’s, I currently have 6 none of which currently have displays actually there all in side the same control panel and I don’t think I could even fit 6 sparks in there.

Yes, with PWM, the pump can for example turn on for 5 seconds every minute.

The code for the Spark doesn’t work well on a bare photon because it expects to find the DS2484 onewire master and it waits for touch screen calibration on first boot.

In the future we’ll support to run all of your fermenters on a single Spark.