I’m experiencing a strange failure mode that I’m not seeing documented anywhere else on the forum. I’m running an Arduino-based DIY Brewpi setup.

The system functions normally for a time–it will command heating and cooling cycles appropriately–then the script locks up. It’s not immediately obvious when this happens, because the browser displays the last logged values in the LCD panel. The only clue that something is wrong is the time displayed on the x-axis of the temperature window doesn’t advance. Here’s what it looks like: 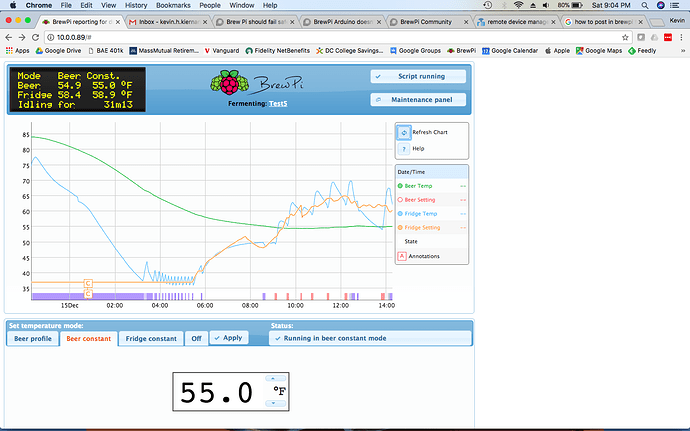 The display shows a time of around 2pm, but this screenshot was taken at 7:30pm. Once I detected the problem, I commanded the Pi to restart, and the script resumed. Here’s what the readout looked like after it ran for a few more hours: 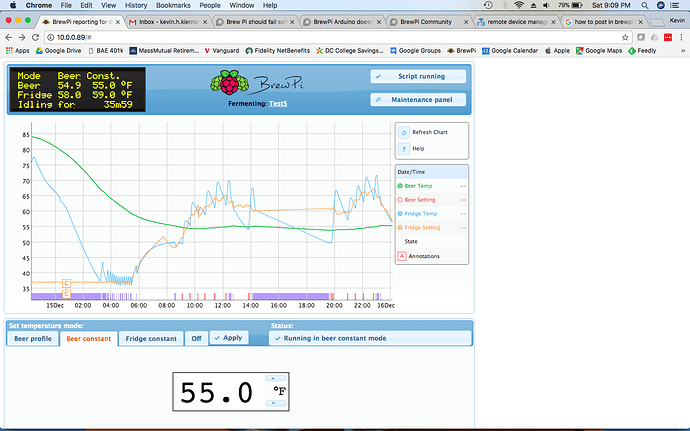 So apparently the Brewpi just stopped doing…anything at all during the interval from 1400-2000hrs, but it didn’t throw any errors (stderr.txt and stdout.txt were empty). The Raspberry Pi wasn’t frozen, as I was able to ssh to it and execute commands. I initially suspected the Arduino, but I made sure it was receiving power independently from the Pi and was connected with a very short (8 inches) USB cable. I also swapped the Arduinio out for a spare one and updated the firmware. None of these measures have fixed the problem.

As I said at the top of the post, I haven’t seen this issue replicated anywhere else, and I’m officially out of ideas for how to solve it. Any advice would be most helpful. Thanks.

Anyone have any ideas?

I was thinking a workaround could be to use the Arduino’s built-in watchdog timer to reset it whenever this condition occurs, but I’m not quite where I need to be with Python to edit the code to do that on my own.

Can someone point me in the right direction? Thanks.