Has anyone tried to use a BrewPi together with an FTSs system from SS Brewtech? Seems like it’d be a much better controller than what’s available in the system. I’m especially interested if there was some way to control both heating and cooling, as necessary, to hold a target temperature.

Since FTSS only provides the basic controller and the coil (and new lid for the chronical), you would need to provide the heating and cooling solution anyway. And I agree, brewpi would be a way better for the FTS

I sent SS Brewtech an e-mail about collaborating. If I can get my hands on a conical I’ll give it a shot

They will probably refer you to brouwmarkt.nl who is their local (BeNe) distributor…

I have 2 half barrel SS conicals and one setup with the FTSs. I have a glycol chiller pumping chilled fluid into the FTSs system and have an older BrewPi controlling it. I have been getting mixed results and my temps have been bouncing around a good bit. The chiller setup they have is very effective at bringing temps down, but the BP isn’t doing as well as it does in a true fridge setup.

I know this is probably due to older code and some limitations with the Arduino based system and honestly I haven’t done any tweaking of the BP. I have my beer probe in the top thermowell and the fridge strapped to the side of the conical as this was the best configuration I could come up with. I am also not using any heating source and rely on the ambient temp in my garage (central Texas) as the heat source. I have pretty decent temp swings you can see here: 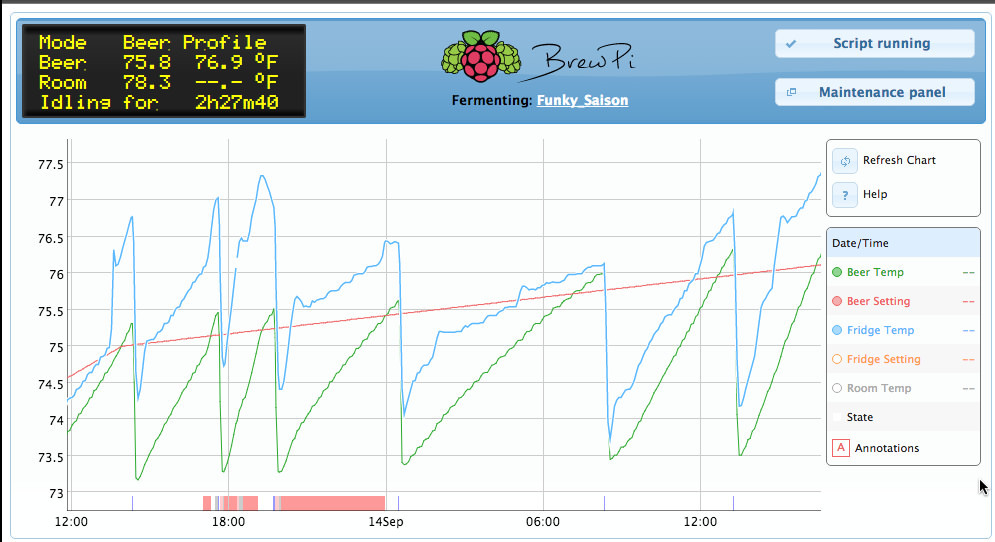 I have a Spark sitting on my desk I should try to hookup and use the PWM code to see if I can get better results, but I am already into this fermentation.

Wow, the cooling is really, really quick. PWM will definitely help to tone that down. It will also work on just the beer sensor, no fridge sensor needed.

@Elco yeah this thing is almost too quick to chill LOL! I guess I need to go ahead and finish putting my Spark together and update the code on it to use the PWM functions. I haven’t been following that too close so wonder how things have progressed there?

which glycol chiller are you using? this since the only ones i can find start at around 1000USD…

This website: www.ontariobeerkegs.com/category_s/275.htm sells the FTSS components without the controller. I planned to build this and use my own controller (BrewPi or similair) to run the pump. I’d put the pump into a smallish picnic cooler full of glycol, and use this chiller to cool it: http://www.amazon.com/Active-Aqua-Chiller-Refrigeration-Unit/dp/B0048IVBT4/ref=sr_1_fkmr2_2?ie=UTF8&qid=1442347770&sr=8-2-fkmr2&keywords=aquarium+glycol+chiller+1%2F10

The control plan is this: Submersible pump pushing glycol from cooler into chiller. Pump controlled by a separate BrewPi setpoint (single temp probe in cooler). Glycol temp set, for example, to 40F (will have to play with that number - needs to be well below coldest fermentor temp). Chiller likewise set to 40, and controls itself.

Separate submersible pump for each fermentor. Set to, for example, 52F. Temp probe in fermentor. Controlled by a separate setpoint on the BrewPi.

Does this sound workable?

@jgalak I think you would be spending way too much going that route for pretty crappy performance. The aquarium coolers are WAY overpriced for their cooling capacity and you will not be able to hit the sub temps you need. You sound like a DIY guy so I would suggest going the route I went and build your own system. Not sure what size conical you have, but looking at that websites pricing you are going to spend more to get a parted together setup as you would to just buy everything for the FTSs from SS (example for my 1/2 barrel parted together 337.95+s/h). You might be able to ask SS to sell you a setup minus the controller since theirs is kinda shite anyway (have to manually choose heat or cool mode).

@korneel I built my own setup using an ITC-1000 (temp controller since I’m not worried about uber precision on the glycol side), 48 quart cooler (holding tank), 5,000 BTU window AC unit (evaporator coil submerged to cool glycol/water mix), two submersible pumps (one to circulate the mixture in the cooler moving it around helps it maintain temps better, and one that is tripped when the BP kicks into cooling mode). This setup as you can see is SUPER effective at cooling. The one bit of advice I can offer is pay attention to the glycol/water mixture ratio and make sure you have way more capacity than you expect to use.

You might be able to ask SS to sell you a setup minus the controller since theirs is kinda shite anyway (have to manually choose heat or cool mode).

I am talking with them about this option.

Under my ferm fridge, I have a 3 drawer freezer. Why not just put a glycol reservoir in there? What’s so special about glycol chillers? The freezer has its own compressor, so I can even control the glycol temp.

Why not let the glycol warm up deliberately? Give it less capacity on purpose? It will be cooled down again by the freezer, but this will take time. Or set the glycol temp to just 5 degrees under the beer, so you won’t cool so damn quickly.

I tried that route before making the separate setup and my reasoning was if I have a single vessel chiller at a constant temp it gives me better range of fermentation possibilities (ALEs on one branch and lagers on another). The thought is to be able to chill beyond lager temps in the glycol vessel cause once the PID setup is there I can heat to control the ale and still maintain the lager temps with one chiller. I also found that keeping the glycol mixture at a constant that would allow this was damn near impossible without greater BTU and there comes the AC unit. Make more sense now @Elco?

Yes it does. It depends on the isolation around the fermenter too I guess. Basically the glycol is just a way to transport heat. If the freezer is capable of cooling the beer, it is also cable of cooling it through glycol, isn’t it? The only difference would be more losses to the environment if the fermenter is badly insulated.

Yeah I honestly didn’t have a dedicated freezer either so I was dependant on my keezer which I can only cool to 39˚ F else I hurt my precious beer. And at the end of the day I was really bored and wanted to see if I could build a system HA HA!

I have the same setup (BME conical, Brewtech Glycol chiller the FTSS controller is replaced by the BrewPi Sparkv2 now)… how did you ahve the temp probes run? I had the “fridge” probe in the 30F glycol…but not sure that is the best route?

If you don’t have a fridge sensor set up, The heater and cooler PID will act on the beer sensor.

I run on only a beer sensor, with the room temp sensor monitoring the glycol temp.
Without a fridge sensor, the fridge PIDs will take the input from the beer sensor as fallback.

Beer-to-Fridge: Kp=0, Td=0, Ti= 0. This will make the fridge setpoint the same as the beer setpoint.

it’s running awesome now! The glycol chiller is way too good…10 secs then off…

Outstanding. I have an Arduino version built that’s currently running my conical in a modified upright freezer, but the freezer I fear is on it’s last legs. Considering the cost of replacing the freezer and adding a second setup, it’s going to be cheaper for me to sell the conical I have now, purchase two new SS Tech Brewmaster Conicals, and a glycol chiller, and run them with the BrewPi Spark.

Is the Spark at a point where it can run two chambers yet? And I also assume that the Spark wouldn’t require the purchase of SS Tech’s controller setup? (Would just need two small pumps for each conical that the Spark would control, as well as two heating pads, and that’s about it?)

Dual control is not finished yet.

You will indeed just need a pump and a heating pad.

With the right settings, the control is pretty accurate. Here is my current brew being kept at 20 degrees: 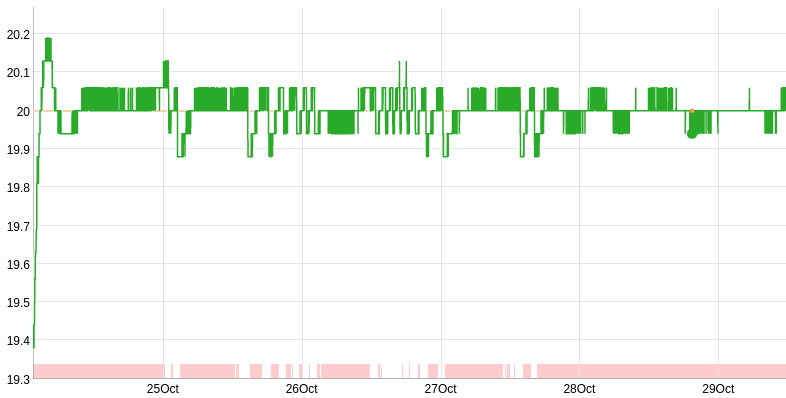 Oh, that’s beautiful. Really looking forward to switching to this setup now, especially as my new house will have warmer ambient temps, so the chilling power of the glycol will be a massive benefit. Am sure you’re sick of being asked, Elco, but any idea when multi fermenter control will be ready? (I initially thought “Just build another Arduino brewpi” but think I’d really need PWM ability for this)