My current setup is having my chest freezer plug into a homemade temperature controller using an STC-1000 controller wired to a typical wall-style outlet. Is there any way to interface this with the Raspberry Pi? I am mostly looking to utilize the web interface with what I already have.

Any insight would be helpful.

BrewPi uses digital temperature probes and STC-1000 type controllers use analogue thermocouple probes. You can however use the same wiring method for BrewPi you are using (wall style outlet) so you don’t have to make any wiring changes to the freezer itself.

STC-1000 are very simple controllers. If the temperature is above the set point they turn on cooler relay, if it is below set point turn on heater relay.

BrewPi uses much more advanced PID and PWM control methods. It has 2 temperature probes, one that goes in the beer and one that measures the air temperature within the freezer. BrewPi controls the fridge temperature in order to hold a very steady beer temperature.

You can also have temperature profiles if you want to vary the beer temperature over time.

So if I wanted to keep a similar setup but use a Raspberry Pi instead of the STC 1000, what all would I need to buy? The Raspberry Pi starter kit (case, power supply, micro SD memory card, display of some kind) and two temperature probes?

The temperature control algorithms of BrewPi do not run on the Pi, but on the BrewPi Spark, which is based on the Particle Photon. The probes are not connected to the pi directly. The Pi just runs the web interface and data logging.

This is a great guide: 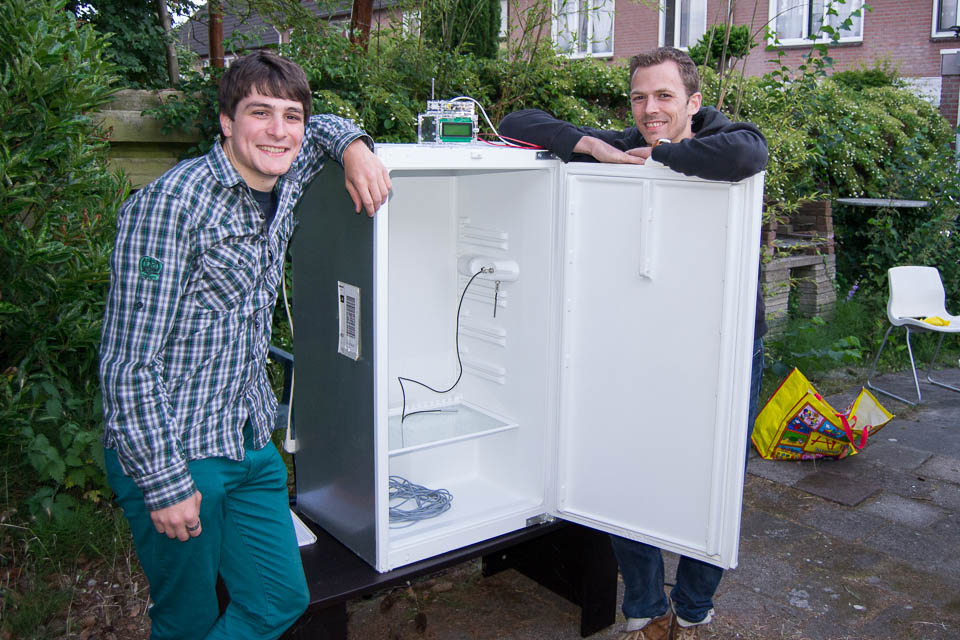 How to convert a fridge into a temperature controlled fermentation chamber. We show how to add temperature sensors and hack the thermostat and compressor.

Built from a smallish old Zanussi Fridge/Freezer combo. It is 52-53 cm wide and about 120cm high. Got it for free from someone who had replaced the fridge in their cabin. It is hust big enough for my build and as small as possible to not take up too much space in my cellar. [image] Final result [image] 12v transformer for the fan [image] Main control box [image] Running a wire through the wall. Old simple fridge with all cooling open in back and no danger of cooling liquid in the wakk (…

It is absolutely possible to use the brewpi without “attacking” the fridge wiring and instead using SSRs to connect and disconnect power to power-plugs that power the fridge and the heater.

Thanks guys! Just got a Raspberry Pi for Christmas to play around with. So I need a BrewSpark in tandem with the Pi even if I don’t want to mess with the wiring of my fridge?

Yes. It is the spark that is doing the actual temperature controlling. The pi is solely for running the webserver.