My Brewpi Massively overheated my Beer to 42 C

Hi there!
First Off: thanks for your great support, reading here really helped setting up my Brewpi. I have fermented 2 Beers Using BrewPi with great success. Unfortunately, during my 3rd beer, an error occurred and I am guessing, my beer is now ruined.
Hardwarewise I am running a small fridge with a 50 W heating cable. The SSRs(from Elcos shop) switch actual power outlets in which the devices are plugged in. The cable and sensors are run through the insulating rubber seal, the beer temp probe is attached to the side of the plastic fermenter and insulated (I know, not perfect).
Softwarewise I am running BrewPi v0.4.3 build 0.4.3-0-g4d00879, running on a Particle Photon with a V2 shield that I recently bought. The photon is powered through the USB of the Pi. This is the configuration I have used, unchanged, for the other beers.
Now to what happened: I left my home for a small vacation, came back yesterday and saw that the web interface did not show that day’s date. I ignored this fact due to lack of time, since the display of the spark showed plausible values for yesterday. I then looked at the spark 30 mins ago and realized that the room temp value was missing, the other values still being there but a bit low. I tried accessing the maintenance panel on the interface but this did not open(I could access the web interface and see the last temp value, which is the one at the end of the plateau in the graph, roughly Jan 1st). I figured the device must have some kind of error and then physically unplugged the raspberry pi from the power supply and re-plugged it. Now, all temp values showed up again, but unfortunately at around 40 C. I am enclosing a pic of the temp graph. I have omitted the first part of the graph to avoid confusion, since I had a wrong temp setting there. The temperature now is actually 40 C. I physically checked the temp inside the chamber, which is perceivably too high.
My question now is: how did this happen and how can I avoid it?
Thanks for your help! 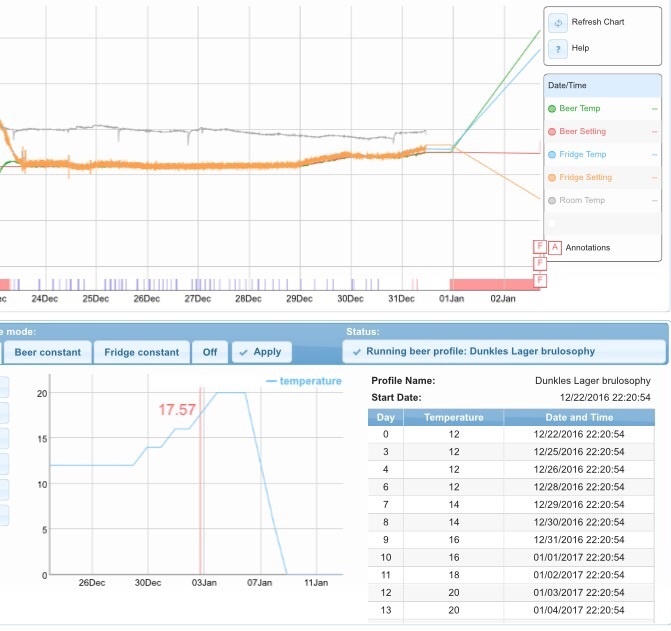 I’m so sorry to hear that!

I think this is probably caused by a bug in the Particle software framework that could cause a complete lockup of the controller. If your logs showed a Serial input/output error, this is confirmed as the most likely cause.

We fixed this bug in 0.4.4, and added a watchdog timer to do a hard reset automatically in case of a lockup.
You can read more about it in the release notes: 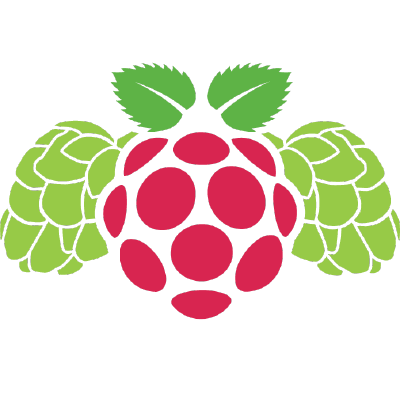 You should update your controller to 0.4.4 using the updater.

Hi Elco,
Thanks for the quick reply, I really appreciate your great support here. Yeah, bummer… Well, seems like a quick fix, I will give it a shot after bottling(let’s see with some new yeast if it is actually ruined). I will report back here in case I experience this again.
Best regards

I’m sorry there’s nothing I can do to help this batch.

It seems to have happened after primary fermentation, which hopefully limited the off-flavors.
Fresh yeast to ferment the bottling sugar will indeed be needed.

Did you taste the beer?

Yeah, no worrys, should have just updated but I was too lazy.
No not yet… I will proceed with cold crashing to remove the dead yeast and then have a taste before bottling to see if there is a lot of “hot fermentation” or even autolysis flavor(I think industrial autolysis for yeast extract production is done at 40-45 C, if I remember correctly …). Unfortunately I will not have time until next week, so it will have to wait. If it tastes not too awful, I will bottle it anyways.

Sorry to hear that, I hope your batch will still taste good!
Along with upgrading the firmware with watchdog support, you may want to add a RTC to your raspberry. I had bad experiences with date/time changing on the Raspberry because of an unreliable internet connection. Since the Rasp doesn’t have an onboard RTC, it’s actually its only way to get the correct date if you don’t set it manually.

You can find many models at your local electronic shop or on amazon, just make sure it’s compatible with your board revision. And they’re cheap (a few dollars).

Hi Guillaume,
Yeah, I guess we will see how bad it was. Thanks for the input! Even though the wifi router is only a few meters away, I will give it a shot. Avoiding something like this is really high priority now… Do the RTCs typically fit inside the standard RPi 3 enclosures?
Cheers

Real Time Clock. A regular PC motherboard has a little battery powered clock chip. This will keep the time when the PC is off. When you turn it on it knows the time. The Raspberry Pi does not have this device so when you turn it on, it does not know the time. If the pi has an internet connection it can get the time from a network time server so it isn’t usually a problem but without a connection you have to set the time manually.

Ahh…many thanks for the explanation. Makes sense.

Hey @simstex, how did the beer turn out?

I have done a couple of fermentations since updating to 0.4.4 and the update seems to have addressed this. So hopefully you won’t have this issue again after you update!

Hi!
Yes, most of the time, they either fit or “almost” fit (you can close it with a bit of pressure

Hey @Hokie_brewer, thanks for asking. In fact, the Beer is now bottled and carbed and tasting fine. I had originally fermented with W34/70 and after the heating, added some Nottingham ale yeast for bottling. It has a little bit of a grainy dull taste to it, but that might also be due to it being brewed with 97% Munich malt, which I have never brewed with before. Adding my fermentation issues and an ale yeast probably didn’t help. No autolysis and almost no ester to it, so after all, it’s drinkable. I guess the beer was almost through fermenting. Lucky me.
@glibersat
Thanks for your help, I will go and get an RTC soon!

Good to hear! Thanks for the update!