Hello all,
I tried searching the forums for this but could not find the same issue. Also, I realize that I am using the old systems so I understand if you want me to go and just buy the new hardware

The issue: when my fridge cuts in, I get a bump on the in-beer sensor reading.

The cabling is the ones already attached to the sensors, plus cat 5e. The jacks are 1/4" Stereo headphone jacks. I always make sure there is no power when I plug/unplug since I’m worried about a short.

My sensors work fine, except there is interference on the beer sensor only. In the image, you can see that when the fridge cuts in i get a bump 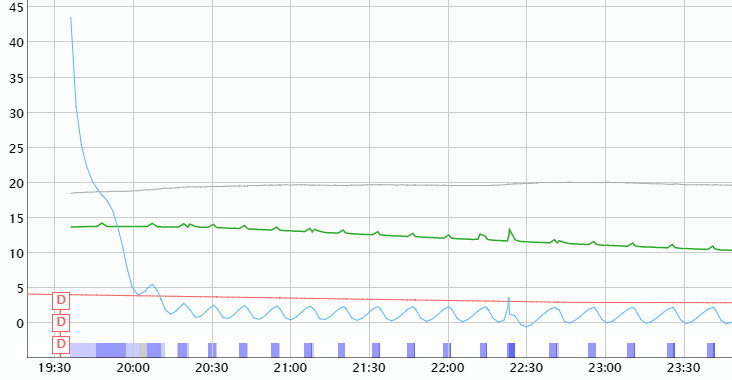 I tried a little experiment - I wrapped my arduino<->fridge cable around the power cable of the fridge. When I do that, and the fridge cuts in, I get terrible interference on both sensors up-stream.

This baffles me, but I’m not an electrical engineer - this is a digital bus, so I would expect interference to give me garbage / broken packets. Is it possible that interference on the line modifies how the IC works, e.g., voltage spikes?

My next question is - how can I go about improving the shielding on that beer sensor wire to prevent this issue? It really isn’t a big deal since the fridge catches up and does a good job anyway, but it is a nuisance.

Thank you very much for reading!!

Do you use an SSR or a mechanical relay?
SSRs switch on a zero crossing of the AC voltage, cause much less of a current inrush. Perhaps switching to SSRs is enough to solve your problem.

Thanks for the reply - I am using mechanical relays. I will investigate solid states for sure!

A quick look found me some cheap ones but they are 5A max. I’ll scour this forum to see what others are using.

Get something similar to what we sell in the store.

I think the electromagnetic interference might influence the analog to digital converter inside the sensor, or they reset between the conversion and the read somehow and you read the default of 85 degrees. We do have reset detection though to prevent that.

Great - I didn’t notice you had some in the store. When I get some project money next I think I’ll do that upgrade. In the meantime I’ll look for other ways to shield, and I may shorten those cables.

Update: I have had other strange sources of erratic readings, and I finally pinned it down. When my electric range is going (about 3-4M away upstairs through the floor), the readings are erratic. They aren’t up to the default levels, but I’m not sure how the sampling is happening (e.g., if I am getting an average over a window) - in that case, then it may be resets.

It seems strange to me that my system is so sensitive to EMI. I am unfortunately not that knowledgeable in that area, but I will keep reading to pin down issues that I may be able to fix

What might help, near the sensor, instead of connecting 5V directly, put in a resistor of 1k and capacitor of 1-10uF.

Thanks - again, my electronics is limited, but that looks like a high-cut voltage filter? I suppose the resistor is to make the capacitor power the sensor and not the rest of the bus.

I’ll dig around my work on Wed to find those parts. I also realized that my ethernet cables are wired with just random cables, and the internet recommends a particular wiring that I’ll try to see if it cuts it down.

The good thing is that it works well even with the noise, my first beer in the fridge turned out well with a nice stable ferm temp despite the issues.

Yes, it is. But the probe takes so little current that the 1K resistor is not a problem. So the resistor will charge the capacitor and the sensor can take its power out of the capacitor. It is indeed a low pass filter that might block out some of the noise on the cable.

So far, it appears to have fixed my issue! I will let it run for a day and post an image.

So which was it? The wiring or the filter? My guess is a combination of both… anything to address the EMI

Hello all,
so a day later, it looks pretty darned good. Look at this: 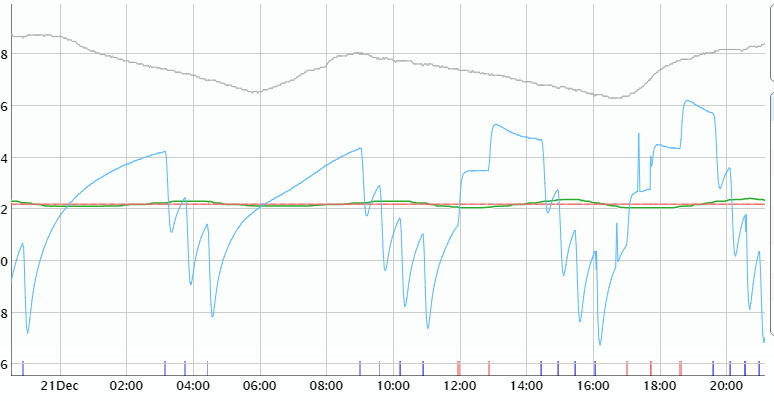 When the fridge cuts in, or when I’m cooking, there are no longer spikes in the beer temp. Interestingly, it is now doing a worse job of keeping the beer temp stabilized than before, but I’ll chalk that up to the adaptive algorithm and give it a few days to catch up.

If you notice on the right, there are still some spikes remaining on the fridge sensor. This is when I was using the stove today. If this becomes an issue, I may solder in another filter on that sensor itself.

Here is a close up: 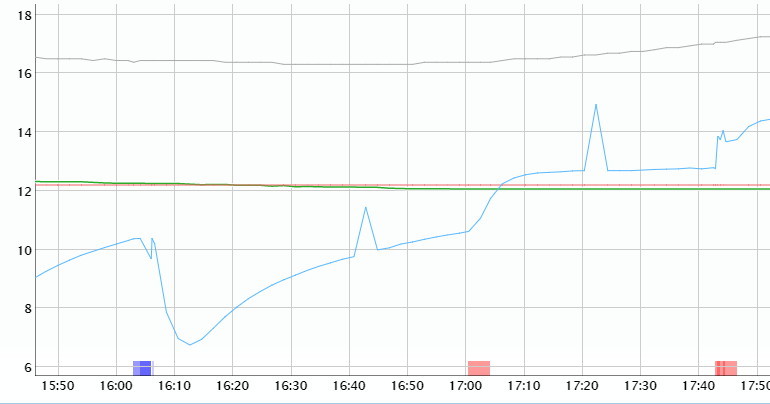 As far as I’m concerned, problem solved! I hope this helps someone.