Data shown in graphs is averaged, based on the shown period and data available in the database.

If you just installed the Tilt it will use the 1m averaging until it has enough data to switch to 10m / 1h / 6h periods.
To try this feature, you can select Spark data over the last month(s). When hovering over individual points, you’ll see the increased interval.

Thx @Bob_Steers!
I changed graph to show “2d” duration and that does indeed smooth out the line with data points at 10m intervals!
Interestingly, when the duration is “1d” the graph still shows 1m data points (but maybe that’s just my lack of understanding all the parts.)
Cheers!

The dataset is selected that has closest to, and at least 200 points during the chosen period.

Assuming no gaps, the boundaries are:

Edit: during design, we also charted yielded points to check max output before boundary.
X is total number of published points, and Y is how much the current optimal dataset would yield.
This is based on the observed ~10 points a minute we get when using a 5s sleep between publishing data in the Spark service.
https://plotly.com/~steersbob/6/realtime-downsample-1m-downsample-10m-downsample-1h-downsample-6h/#/

I think I got too excited too soon (well, I’m still excited because this setup is so much better than the tilt app, but …)
Tilt data has stopped showing up on the graph.
If I restart the tilt service, it starts showing up again for a few minutes, then stops again.
I don’t see anything interesting in the tilt service logs.

Anyone have any troubleshooting thoughts?

A few people have mentioned this but I haven’t seen it myself. I seem to remember someone mentioning the same was happening with the TiltPi software. I’ll try and put some time to investigating when I can but I can’t promise when that’ll be. If you do spot anything in the logs etc, I’d love to know.

Hi all,
I started a new topic for: [Brewblox-Tilt] Tilt data stops showing on fermentation graph

I’ve not checked in on brewblox and tilt integration in a long time, but it appears things have been moving right along. A question since I’m not looking to upgrade my system for another week or two: does this service allow the poll rate from the tilt to be adjusted independent of the other devices (i.e. temp probes)? With my current setup it polls the tilt so frequently that the battery dies after a handful of brews.

The Tilt is independent from everything connected to the Spark.
@j616s will have to clarify what the poll rate is for the Tilt, and whether it can be adjusted.

The way the Tilt works, it isn’t polled. The Tilt broadcasts at a set frequency over Bluetooth Low Energy and anything else listens passively. I think there may be some feedback in BLE to ask transmitting devices to adjust their transmit power but I’m not certain if thats implemented. And my understanding of it is that adjusting when/how often the receiving device listens won’t have any impact. But my understanding is the device will always broadcast values at whatever frequency it chooses no matter what is listening. Any change in battery life is likely coincidental. The tilt service will record values as frequently as it receives them, which I seem to remember Tilt state is every 7secs, though I think its a bit variable. Particularly if the signal is poor and the receiving device misses a broadcast.

Ah, that’s really interesting and good to know @j616s. At least from my experience, I get probably 3-4 brews out of a battery whereas others seem to suggest 10-15 when checking intermittently with the tilt mobile app (all anecdotal of course). It could be coincidental as you say, but I wonder if as part of the bluetooth protocol if there’s a lower-cost receiver discovery process that would reduce overall power usage if nothing is listening for the data.

But, as I say, the BLE profile used is a passive broadcast one. It’s actually primarily intended for location finding in buildings or underground metro systems. You have a beacon that broadcasts two IDs. One for a large scale location, e.g. building, and one for a small scale, e.g. room. That way, an app on your mobile could figure out where you are when you can’t get a GPS signal. Tilt use the same thing but put the temperature in in place of one ID, and the SG in place of the other.

@j616s Hi James,
I’ve set up my brewblox controller on a Ubuntu 20.04 machine.
Unfortunately, my tilt is not pairing via Bluetooth.

I can see the tilt on my iPhone in the Tilt app.

can try to pair with the blutoothctl command line?
thanks,
Douwe

Hello. Bluetooth Low Energy as used by the Tilt doesn’t pair. The Tilt just broadcasts values to anything listening. It looks like the Brewblox Tilt service has started correctly. So it could be an issue with the signal strength? Your phone will likely have a different type of antenna/bluetooth chip to the one in the computer you’re using to run Brewblox. These factors along with things like orientation of the antenna can affect signal strength. Your phone getting a good signal isn’t necessarily a guarantee your computer will. You could give blutoothctl a go, though.

I will give that a try.
The ubuntu machine is pairing with a bluetooth speaker and my Ipods. So bluetooth is working.I use a Pluggeble USB dongle. The machine is less than 1 meter away from the fermentation vessel.

I will keep you informed!

Is it possible that the dongle doesn’t support BLE? That might result in the software connecting to the bluetooth drivers successfully but it not receive any data.

I will check that, Thanks

@j616s I’m still fighting issues of not being able to see my tilt in BrewBlox - with or without my tilt repeater. How would I go about uninstalling and reinstalling the service? Thanks.

If you are in the ~/brewblox directory and run
brewblox-ctl update
This will reinstall everything, there is no need to uninstall as these are containers and it will be completely new in effect.

On the Fermentation dashboard, in the Ferment Graph block, if you expand the block (click the <> button - show full widget):

Any Tilts which can be seen by the Brewblox server should shown under the spark-one in the selection list for metrics to display on the graph: 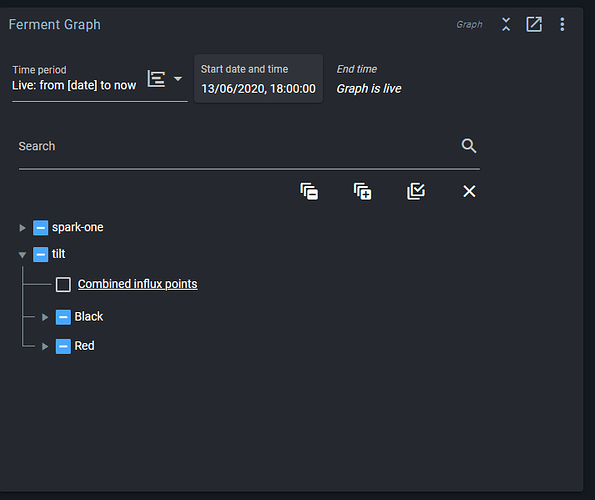 Do you see the Tilt show up here?

Jerry, thanks for the response. I’d previously had the tilt showing up as you show until about a week ago. I added a Tilt repeater and did a Brewblox-ctl update at that time and lost visibility to my tilt. I did just retry the update command but still can’t see the tilt. 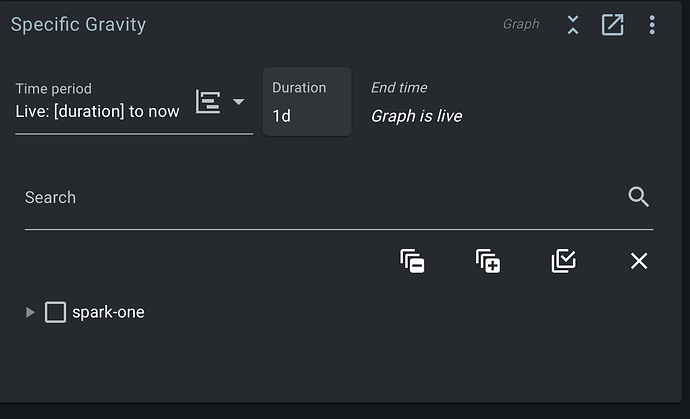 If you are in the ~/brewblox directory, can you try running: brewblox-ctl service show? You should see all services installed - just to verify that the tilt service is still installed and has not been lost during one of the reinstalls?