I could probably help with that. How does using the BrewPi for a mash controller differ? I’m still relatively new to the BrewPi, so I’m not sure how to use it to it’s full extent. Is there a separate web UI for mash control?

I think an app specifically for mashing would be really useful. Some things that jump to mind are you could have a timer for hop additions and switch to Proportional only control during boil (with power adjustment slider for real time adjustment of power level to set boil rate).

One mashing system with an app I really like the look of is Brew Boss:

Does the BrewPi currently have a UI for controlling the mash?

No it uses the same UI that is used for fermentation.

I’ll need someone to explain to me in detail how this is working.

There’s a thread here that talks about how to use the current UI/Firmware (originally designed for fermentation control) for mashing:

I have been testing the new version of BrewPi a lot on my HERMS setup. The new controller code has been tweaked a lot to work well when controlling mash temperatures. The user interface is still very much fermentation oriented, but by changing a few settings, it will work well when mashing. There are 2 options: Controlling a heater directly, based on your mash sensor Cascaded control: your HLT setpoint is adjusted automatically based on your mash temperature. I used the second option in…

As previously mentioned the team are working on a total re-design of the script and web UI to be more generic, so mash control will be easier.

I suspect I’d need some hardware in order to do any real dev/testing of this. I setup a second Raspberry Pi running BrewPi (I didn’t want to continue doing dev on my real chamber), but there’s not much I can do with it, without additional hardware.

I agree, you need a dev spark

Let’s have a chat how we can align our efforts. I have sent you a slack invite.

You’ve already got my address!

Please let me test this!!!

I would be in for a test too

I got 3 BrewPi Sparks up and running, so I could very well test the handling for multiple devices, if the app already supports this.

I would also like to test this. I am receiving my Brewpi Spark shortly and will be using it for mashing.

I started a fresh version of an app recently. Currently only supports one BrewPi and one Tilt Hydrometer, but I’ve considered allowing it to support multiple instances of each. 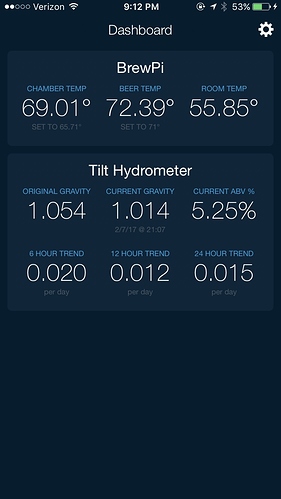 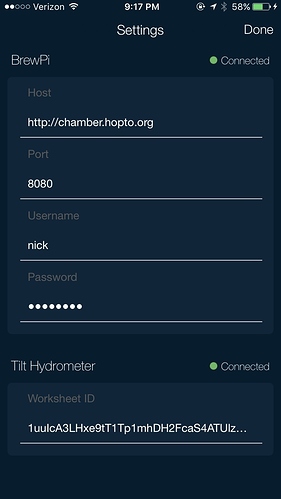 Since @Elco and crew are working on a new version of the software I didn’t put the effort into making this app actually control the BrewPi. So for now, it’s read only.

Also haven’t had any luck finding a decent charting library for React Native, so it’s also lacking any graphical representation of the data.

Nice start, even without a graphical view. In actual fact your view might be better than a graphical view, I use Chrome RDP to view BrewPi on my phone, and the graph is pretty small. I like the trending fields at the bottom. Also, control is a ‘nice to have’, I fire up my laptop and use RDP to change if needed.

I’m working on getting it available for Beta testing via Test Flight for iOS.

sorry I will have to wait for an Android clone

That’s the beauty of React Native. Although I haven’t specifically tested it, it should work out of the box with Android. It’s just a matter of me taking the time to generate the apk. There’s nothing about this app that’s platform specific.

Should be ready for iOS beta testing tonight if anyone is interested. DM me your email address.