I’ve noticed some strange behavior with my two interior temp sensors shortly after booting up or rebooting. Each registers a very high temperature only to settle down to the “actual” temp after a minute or two. The attached screen grab shows a reboot during the middle of a water test and the aforementioned temp spike, though only on the Beer Temp Probe.

Not sure if its relevant but these two internal sensors share common wiring to the brewpi and are “split” inside the fridge and each split is wired to the RJ12 connectors respectively.

The result of this is that the Pi wants to go into cooling mode when it picks up these misread beer temps, when in fact the actual temp is spot on. 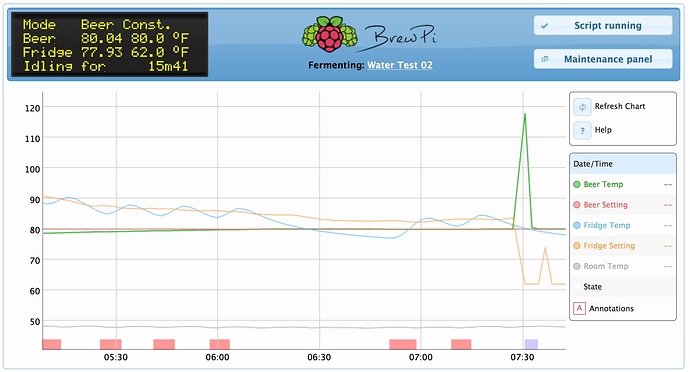 Thanks, I’ll look into it.

Filters can be initialized with invalid temperature sensor data

As reported here: https://community.brewpi.com/t/temperature-sensor-high-temp-at-startup/1476 When a temperature is read from a DS18B20 sensor that is not correctly initialized (triggered a temp conversion), it...

Glad it’s finally getting sorted . It was first spotted and brought up back in September

is the following behaviour the filtering in action or something else.? From a cold power on I have noticed both the fridge and Beer temp start at 85˚c whilst the room Temperature ( if I am remembering correctly from another thread) is correct as it isn't filtered.. https://goo.gl/photos/MuZvz8QJ8AQEVZX77

I just finished beta release 0.4.3b. Will post instructions tomorrow on how to update. Do you have this problem consistently? Would be good to know if this release solves it.

I do notice this every time I reboot. However, I haven’t noticed it with the Fridge sensor lately, only Beer Temp.

Thanks Elco, I’ll look for the update.

I just finished beta release 0.4.3b. Will post instructions tomorrow on how to update. Do you have this problem consistently? Would be good to know if this release solves it.

Should we update to 0.4.3b2? Or is it not ready yet? I just ran the update script, but it looks like the firmware for photon is still 0.4.2 and a newer version is not yet available. I guess I rather wait until everything is ready

I am coding some changes to the update process to allow updating to beta releases without losing your settings. Will post instructions soon.

Done. I’d love to hear some feedback on whether this is resolved in the beta release.

I dont see those high temperaturesno more. Not on the screen and not on the webinterface.

Great, thanks for reporting

I just updated the firmware without incident and it appears that the issue is also resolved on my system!